Mike Huckabee apologized for saying Barack Obama grew up in Kenya, explaining only that he meant that the president isn't a Real American. 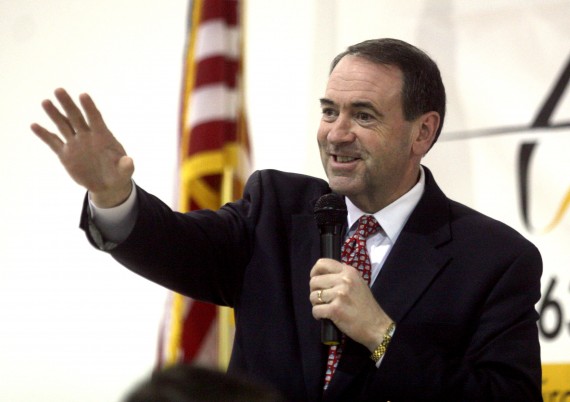 Last night on “The O’Reilly Factor,” Mike Huckabee apologized for saying Barack Obama grew up in Kenya, explaining only that he meant that the president isn’t a Real American.

Huckabee: My point, really, even about talking about him raised in a different country, actually Indonesia, not Kenya, as I do understand, again, it’s right there in the book for me to read and anybody else if they care to, but the point that I do want to make is that creates a different worldview. This is not a kid who grew up, you know, going to Boy Scout meetings and playing Little League baseball in a small town.

O’Reilly: He is not a traditional guy; he’s a guy who’s had a lot of life experience that is different from, you know, the mom-and-apple-pie upbringing.

New York‘s Dan Amira (via Taegan Goddard) notes that, by this standard, Ronald Reagan wasn’t a regular American either.

It’s true that most Americans don’t spend a few years of their childhood living in a foreign country. And obviously Obama experienced some unique things in Indonesia. For example, as he wrote in Dreams From My Father, he tried “dog meat (tough), snake meat (tougher), and roasted grasshopper (crunchy).” So that’s different.

But in their attempts to portray Obama as devoid of traditionally American experiences, Huckabee and O’Reilly are pretending as if everyone else is growing up in fifties suburbia. In reality, we have a diverse country, and American upbringings are similarly varied. It’s no less American to play basketball instead of baseball, or to spend your time at the beach instead of the Boy Scouts. As for O’Reilly’s “mom-and-apple-pie upbringing,” we’re pretty sure Obama had a mom.

If the absence of Little League or Scout meetings is really so disconcerting to Huckabee, we wonder what he would say about Ronald Reagan, who also never participated in either of those things (“I never cared for baseball … because I was ball-shy at batting,” he once said). In fact, out of all our presidents, only George W. Bush is a former Little Leaguer, and only John F. Kennedy, Gerald Ford, Bill Clinton, and Bush were in the Boy Scouts. All of our other presidents, we guess, had an exotic, un-American upbringing, and a skewed worldview.

Of course, this is to take Huckabee literally. What he clearly meant to say is that someone called Barack Obama is not a real American.

That strikes me as a wee bit unfair, especially if it’s meant to imply that Huckabee is racist. A more charitable interpretation is that Huckabee is playing the standard “small town America is the real America” card so beloved of conservatives. It’s the ethos of the amusing commercial series some years back from Pace picante sauce where New York City?! was the punchline.