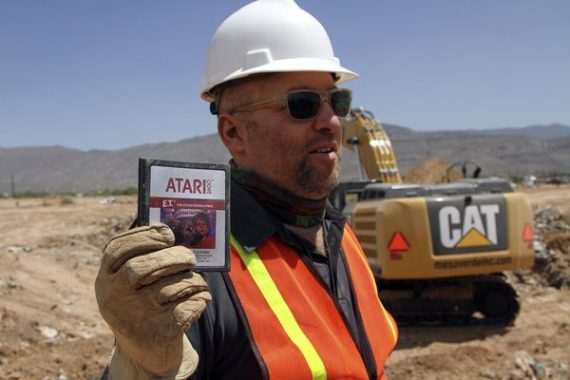 When Steven Spielberg’s classic film E.T. The Extra Terrestrial was released in 1982, Atari paid some $20 million for the rights to develop a video game based on the movie. On the surface, it seems like it would have been a smart business decision for the video game company. Atari’s groundbreaking 2600 system had been on the market for about five years at that point, and 1982 also saw the release of the company’s next-generation system, the Atari 5200. Creating a game based on a wildly successful movie would potentially mean more people purchasing Atari’s systems and game cartridges, after all, and at the time it seemed like the sky was the limit for the video game industry in general and Atari in particular. Unfortunately, theory and practice didn’t exactly coincide. Even by the standards of the time, Atari’s E.T. game was just horrible. The graphics were amateurish, the music was annoying, and the plot of the game not only had nothing to do with the movie but it was exceedingly silly. The game was critically panned, and as word of the game spread through word of mouth, sales were disappointing to say the least. Indeed, the game is at least partly blamed for the crash that occurred in the video game industry in 1983.

For decades, rumors persisted that Atari had buried hundreds of unsold copies of the game in a land fill in New Mexico and, now, we know that this is what actually happened:

ALAMOGORDO, N.M. — “We found something,” said Zak Penn, and the crowd cheered.

Penn, the director of films like “X Men 2,” is making a film about the hunt for thousands, or even millions, of Atari E.T. game cartridges that the company disappeared 31 years ago. No one has known for sure where they went. Until now. Now we know.

“For anybody who doubted,” Penn continued, “there’s a whole heck of a lot of games down there. We just saw them.”

It was 12:45 p.m. local time today, and hundreds of people were gathered at the old landfill in Alamogordo. There’d been lots of clues that the games — along with unknown other titles and hardware Atari didn’t want anymore — had been dumped here. And yesterday, the crew making the movie had done an initial dig. As a result, garbage buried here for decades had blown up against an orange trash fence: A 1979 IRS form 5695 (“Energy Credit”) and an IRS Optional State Tax Table; A customer register from the Townsman Motel dated July 3, 1978. Even an old plastic Bounty paper towel package.

But the crowd was here for the games. And until they were actually spotted, no one was really sure they were here.

Holding up his prize find, Penn put those doubts to rest. The game cartridge was in nearly perfect shape, though its packaging was ripped almost to shreds.

In the background, a set of Atari 2600s with the E.T. game actually playing — not cartridges from the dump — were spitting out the distinctive 8-bit music from the game. It was perfect.

In fairness to Atari, it was probably inevitable that the game would end up being a bomb. According to reports, the negotiations for the right to create a video game based on the movie didn’t close until July 1982, which meant Atari’s programmers had basically just over a month to create the game so that the cartridges could be manufactured in time to be ready for the 1982 Christmas shopping season. With that kind of a deadline, it was probably inevitable that the game was going to be a disappointment, and that’s exactly what it turned out to be. I remember as a kid being excited to get this for Christmas that year, only to be utterly disappointed when I actually played the game.

In any case, one of the great urban legends of the early video game era has been confirmed.

For those of you who missed out, or don’t remember, here’s a video showing what the game was like: