WaPo — Hussein Given Summary of Charges in Court Appearance 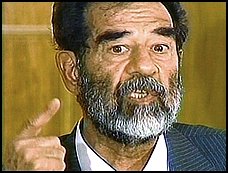 Former Iraqi dictator Saddam Hussein, combative and at times defiant, appeared in a heavily secured courtroom for the first step in criminal proceedings against him and 11 other members of his regime.

Pool reporters in the courtroom said Hussein was read his rights, given a summary of charges involving seven separate crimes, including genocide against religious groups and the invasion of Kuwait, and informed of his right to a lawyer, even if he could not afford one.

“I am Saddam Hussein, the president of Iraq,” he said, when asked to identify himself. He branded the hearing “theater,” according to pool reports, and said the real criminal was President Bush. When informed that he would be charged, among other things, with the invasion of Kuwait, he called Kuwaiti’s “dogs” and said Kuwait belonged to Iraq. The Iraqi judge cautioned him about his language, informing Hussein that he was in “a court of law.” He laughed when the subject of paying for a lawyer arose, commenting that it was well known that he had “millions” stashed away, according to pool reports.

Hussein’s hands were cuffed when he was brought into court for the arraignment, which lasted about 30 minutes. The cuffs were taken off when he went in. Hussein was flown by helicopter from an undisclosed location and driven to a court room on a U.S. base. He was led from an armored bus escorted by two Iraqi prison guards and ushered through a door guarded by six more Iraqi policemen.The bus was escorted by four humvees and an ambulance. 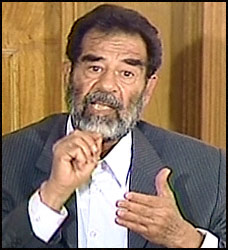 Hussein and 11 of his lieutenants will be ultimately charged with crimes against humanity, for acts including genocide committed between July 17, 1968 through May 1, 2003. But no actual trial is expected for months, at least.

Commencement of the process itself has enormous symbolic significance, however. Two years ago, the feared Iraqi leader lived the life of a king, shuttling from one grand palace to another. Seven months ago, he was pulled from a hole in the ground where he had been hiding from U.S forces, looking weary and dissheveled, his wild hair and uncombed beard caked with dirt. Thursday he was hauled into court, under the legal control of a government composed of long-time enemies.

So it begins. So far, Saddam is acting very much like Slobodan Milosovek.

Update: NYT editorial page gets it right! — The Trial of Saddam Hussein

In Saddam Hussein’s Iraq, courts counted for nothing, while fear, death and vengeance were the only laws of the land. A new Iraq must be built on more solid foundations: democracy and the rule of law. One of the first challenges will be bringing Saddam Hussein to justice. His trial can be a significant step toward the rule of law Ã¢€” or a detour back to the rule of revenge. He should have a fair trial under an elected government applying the relevant principles of Iraqi and international law.

The actual trials should not begin until an elected government takes power, a step planned for next January. Starting them sooner might produce political dividends for the appointed Iraqi interim government or the Bush re-election campaign. But it would not serve justice or help restore Iraq’s standing in the international community.

The 12 accused men are no longer prisoners of war. They are criminal defendants under the legal authority of Iraq’s interim government, although they remain in the physical custody of the American military for security reasons. That is acceptable as long as Baghdad wants it that way, and provided the defendants have the rights that go with their new legal status, including the chance to consult with their lawyers and safeguards against abusive interrogations. Commendably, Prime Minister Iyad Allawi has promised that the men will be able to choose their own legal counsel and will not be compelled to testify against themselves. He has also suggested that Mr. Hussein’s trial is unlikely to get under way for at least several months. That should be the case for the other defendants as well.

Millions of Iraqi families persecuted by Mr. Hussein are impatient to see him pay for his terrible crimes. That is understandable. Under his rule, they grew up in an Iraq where revenge, not justice, was the only available recourse. Their children deserve to grow up in an Iraq where the rule of law applies impartially to all.