Now that's a lot of beef. 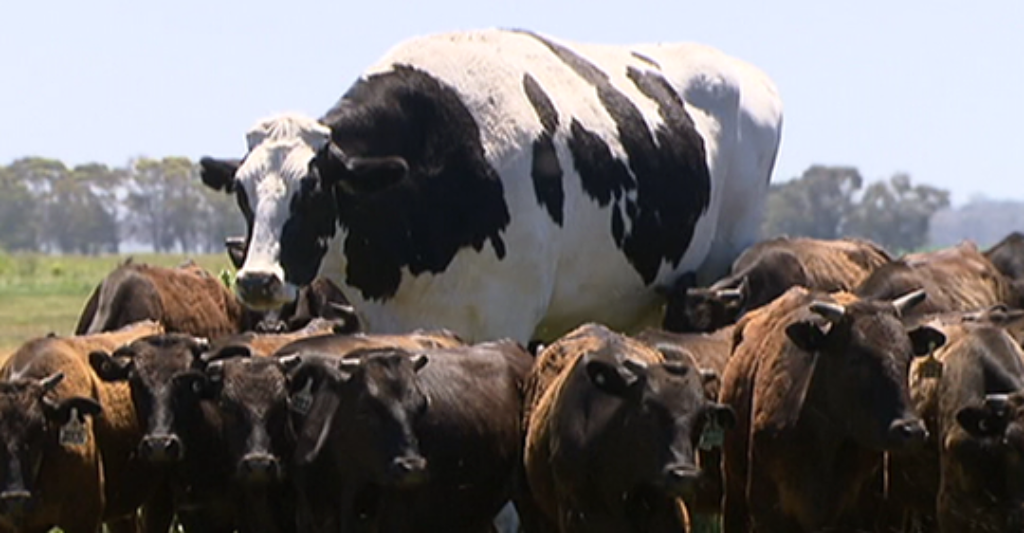 And now for a bit of a palate cleanser. Australia is known for some unusual and unique animal life, but this is one for the record books:

The world’s expectations for a hero have perhaps never been lower.

Which brings us to the steer. It’s like a normal steer, but bigger.

The very big steer is, according to the nearly unanimous acclaim on social media, a hero. At 6 feet 4 inches tall and more than 1.4 tons (2,800 pounds), it is roughly the height of Dwayne “The Rock” Johnson but weighs about 11 times as much.

Its enormous size — just three inches short of the Guinness World Record for tallest living steer — saved it from certain death, its owner said. No one bought it for slaughter at an auction last month because potential buyers said it wouldn’t fit in their farm equipment.

“He was always a standout steer,” said Geoff Pearson, who owns thousands of cattle in Myalup, a small town south of Perth in Western Australia.

The steer’s name is Knickers. He’s a Holstein-Friesian, a dairy breed.

He is not, as many on the internet have wrongly assumed, a big cow. A cow is a female that has had at least one calf, while a steer is a male that has been neutered.

Mr. Pearson said he doesn’t usually get attached to his cattle. But Knickers is different.

Get a load of this guy.

There was something familiar about him. Knickers is that guy who stands in front of you at every concert.

There was something relatable about him. Knickers looks the way you feel when you don’t know anyone at a party.

And there was something inspiring about him. Cattle don’t typically have much control over their fate. Knickers beat the system.

His reward for escaping the literal chopping block will be a life of coaching other animals on how to live their lives at the farm, Mr. Pearson said. The other animals have taken to him.

Mature steer of his breed typically stand 4 feet 10 inches tall and weigh about 1,500 pounds, according to the Cattle Site.

While Knickers is undoubtedly an absolute unit, the images make him appear even bigger when surrounded by Wagyu, a different breed of cattle that typically tops out at about 1.4 meters, Mr. Pearson said. And while Knickers is 7 years old, the cattle surrounding him are about 1, he added.

No need to ask “Where’s The Beef?” anymore.