Ben Mathis-Lilley is not a big fan of “What if Firefighters Ran the World?” an entry in a series of populist ads by a cell phone provider.

This basic message works smoothly enough in the steelworker/DMV and roadie/airport bits, which make a simple point about technology improving the speed of procedures that most people find tedious. The target is different in the delivery-guy/high-school spot—it’s not as though “lethargic pace of truancy enforcement” ranks high on most people’s list of frustrations, and typically we as a popular culture sympathize with class-cutters rather than their pursuers. But the ad still works as a tongue-in-cheek scenario: Efficiency has definitely been increased, if not in a way we’d all like.

The real impotent-rage inducer is the spot featuring a mass of sooty, fully uniformed firemen gathered in a legislative chamber. The chief picks up a gavel, and the assembly proceeds decisively through a legislative agenda:

The session wraps up quickly. “This is the easiest job I’ve ever had,” smirks the chief. “We’re outta here!”

Not fully realizing that this is supposed to be a cutesy commercial rather than a political treatise, our hyphenated-surname analyst observes,

Isn’t it actually the government’s failure to haggle over details that causes so many of our problems? Here’s the fireman legislature’s take on an environmental bill: ” ‘Lots of paper to tell us we need clean water. Need clean water, guys?’ ‘AYE!’ ” These guys just don’t seem like they would have dug into the details of mortgage regulation, credit-default swaps, or FEMA oversight (and let’s not even get started on their likely insensitivity to women’s issues). In fact, if the heroes of these commercials are supposed to be paragons of no-bullshit efficiency, why are they communicating via Sprint Nextel Direct Connect despite being in the same room together? Which fireman subcommittee authorized the purchase of all those walkie-talkies? In this ad, Sprint Nextel’s crowd-pleasing formula is mangled; the spot is a polemic against the idea that government should involve reading, writing, and discussion.

And, really, regardless of what side of the current political debate you fall on, one thing you probably don’t think is that it’s a good time for Americans and their elected representatives to spend less time thinking about the details of governing.

Well, sure.  Again, the point of the spot is to extol the virtues of walkie-talkies, not serve as a blueprint for governing.

Presumably, though, the idea is to have government be a little more like this and a little less of the inside-baseball, over-lawyered mess that it is now. Now, we need lawyers.  But maybe not quite so many of them in the halls of Congress. 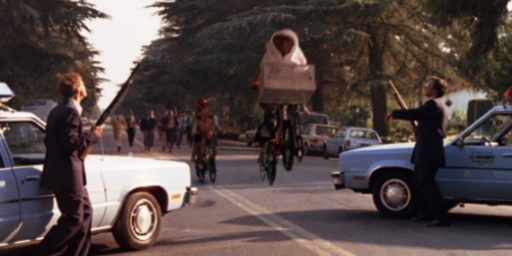