In 1914, Boston Braves Wore Hats With Swastikas On Them

There used to be a time when swastikas were thought to bring good luck:

Why were the Boston Braves wearing a swastika on their caps when they opened the 1914 season against the Brooklyn Dodgers?

The swastika’s nearly universal association with Nazi Germany was still years away, although a militarist German youth movement adopted it as a national emblem in 1914. Still, it seems unlikely that the future Hall of Famers Rabbit Maranville and Johnny Evers and the rest of Manager George Stallings’s team meant to inflame racial hatred in Brooklyn by adorning their caps with swastikas.

Swastikas date to 2500 or 3000 B.C. in India and Central Asia. The word is from the Sanskrit svastika, which means good fortune or well-being. It later traveled to Europe, where it was claimed by the Nazi Party around 1920. And it found benign use in the United States on a pendant made by Coca-Cola and as a shoulder patch for the United States Army 45th Infantry division.

Several sports teams, especially in hockey, wore swastikas on their uniforms in the pre-Nazi era, hoping for good luck, said Paul Lukas, the creator of the Uni Watch blog.

“You also see it in Native American imagery as a design,” he added. “It’s a powerful, balanced, impactful design, one reason the Nazis used it.”

If the Braves were hoping the swastika on their caps would bring them luck, they were surely in need of it. They had endured 11 consecutive losing seasons heading into 1914. In 1911, they won only 44 games.

In 2009, Lukas posted a link to a photograph estimated to be from around 1915 of Maranville wearing a cap with a swastika on it. A few months later, Tom Shieber, the senior curator of the Baseball Hall of Fame, analyzed the uniform and the ballpark’s background in the picture and concluded on his Baseball Researcher blog that the photograph was taken on April 14, 1914, opening day at Ebbets Field between the Braves and the Dodgers. The ballpark was in its second season as the home of the Dodgers.

Here’s the photo in question: 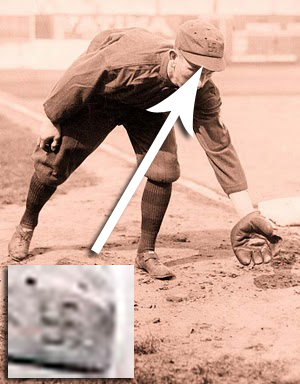