Unlike the other reports, I did not have a problem with long lines going though the swearing-in security checks for the inauguration, but it depended on which section you were in, and which entrance you used. I had tickets for the Gold area, the largest and furthest of the ticketed areas, being a standing area just behind the Reflecting Pool at Third St. We lucked out approaching the Gold area from the south, as we breezed through security in under 5 minutes; all they did was a pat down. I assume there were also radiation detectors, as there were signs about this. The general public no-ticket area stretched the rest of the way down the mall, and similarly did not have access problems. On the north side though, at Pennsylvania Ave, reports were the wait for Gold was 2 hours because that entrance doubled as the entry for the parade protesters. The line for the closer-in, but much smaller standing area (Yellow) stretched over 2 blocks though. I saw several people in our area carrying the closer-in yellow passes who probably gave up on their line. 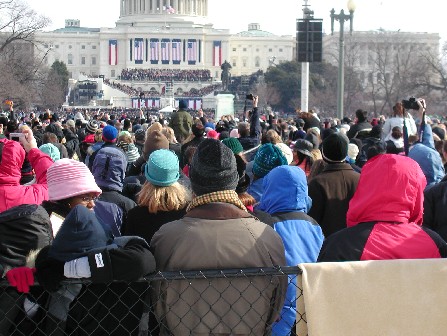 After the swearing-in, we headed on Third St NW to the parade route on Pennsylvania Avenue, and found that we were already inside the security zone so we didnÃ¢€™t have to go through another security line. There we came across the first group of protesters half blocking the sidewalk on the south side of Penn Ave, the infamous hate-filled Rev. Phelps of Topeka, KS with 15 or so of his followers holding up posters. In addition to their normal “God hates Fags,” their other posters included Ã¢€œTHANK GOD FOR TSUNAMI,” “FEAR GOD,” “U.S.A. SIN = 9/11,” “THANK GOD FOR 9/11.” The crowd pressing by was incredulous, and started singing “God Bless America” to drown them out, and yelling accusations regarding their family relationships. I will not put their link here, as their site is incredibly bigoted and there is no reason to give them a trackback. 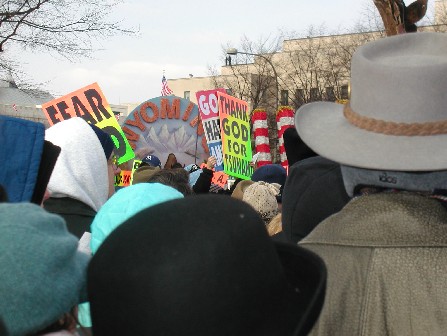 Religious Zealots in Front of the Wyoming Float 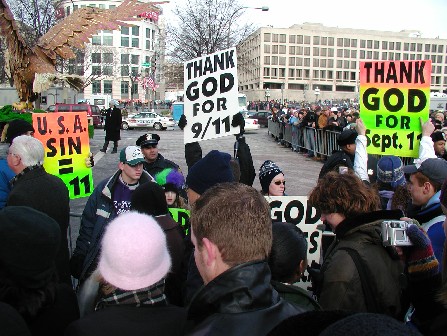 More Moonbattery from the Right

Proceeding past the zealots, we could see the anti-Bush protesters on the north side of Penn Ave. They were allocated 4 blocks (Third to Seventh – there were more protesters at Freedom Plaza at 14 th – most of the media coverage of the minor violence was at 7 th and 14 th). The majority of the signs stated messages such as “Impeach Bush,” “Guilty of War Crimes,” and “Spend $$$ for Schools….” On the south side of the street there were only a few people with signs (plus one Proselytizer handing out leaflets, Repent!). 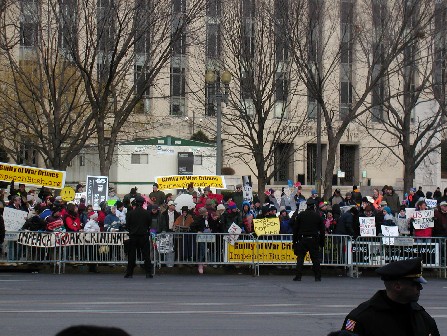 Peaceful Protesters on the North Side of Penn Ave

Just as we got to Seventh St, the police closed the street crossing (there were only a three locations you could cross Pennsylvania Ave before the parade began). This was over an hour before the stated closure time of 2:30. With police from over 40 places (including Chicago, Texas, and Charlotte, NC) the coordination left much to be desire as they told us to go back to 3rd St, but when we got there, it too had been closed and there was no way out to the north. They eventually relented and let a group cross at First St NW (probably because there were some protesters stuck on the south side).

Finally on the north side, and outside the security zone, we made our way to Seventh St. Along the way I saw the Protest Warriors walking by Judiciary Square, being trailed by several unkempt looking “opposition.” I gave them a thumbs up. At Seventh, there were large groups of protesters and police in riot gear at the access point to the parade route, as well as regular spectators walking by. 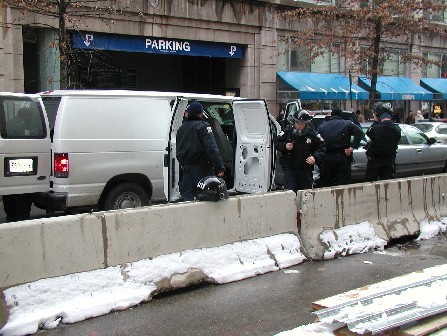 Police Getting Ready at 7th/D NW 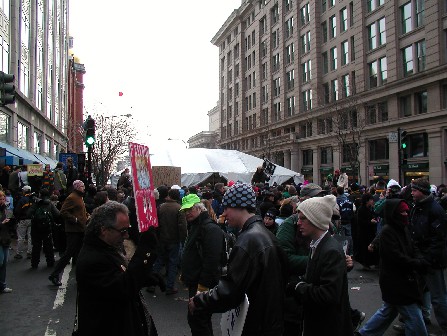 Further up Seventh NW, the anarchists were gathering at Gallery Place Metro. They looked like a cross between punk rockers (spiked hair and piercings) and the homeless (unkempt). We went into a nearby restaurant to watch the parade on TV, and the events outside the window. The anarchists headed towards Penn Ave, and 10 minutes later multiple emergency response vehicles followed. About this time the TV showed an altercation several blocks away, and the police using pepper spray. Not long after that we jumped back on the Metro to go home, having enjoyed experiencing a major day of our democratic Republic. 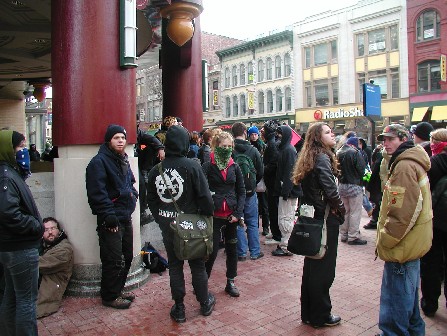 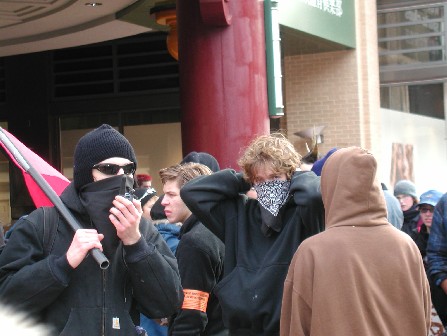 Looking back, the security screening and crowd control at the inauguration definitely need improvement. The reality did not match the FAQ that the Scouts were handing out, and the suggested Ã¢€œcrowd movementÃ¢€ routes were often barricaded. I do not mind that there was security, unlike some of the talking heads that complained that they were disgusted that the parade was turning into an armed camp; rather I was annoyed at how it was executed. As for the protesters, there were moonbats on both the left and the right, though the ones on the left are far more numerous. And despite the media attention on the protesters, most in the crowd were amused by their statements, and rather than agreeing with them I heard many mocking snide comments. I saw many of the protesters as, simply, sore losers, and reminded myself that the lead organizers of many of the protesters are the same people that organized the anti-war protests 2 years ago, mostly old school socialists living is a different reality than I. In any case, I was glad to have attended another significant American moment.

[I’m a guest poster, and hope I didn’t make too many errors using the WordPress program that powers this blog – first time using the program.]