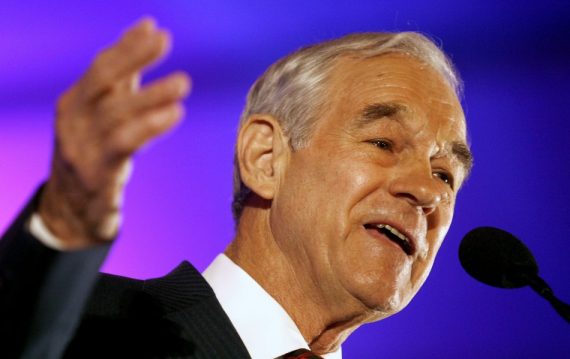 The efforts by some Ron Paul supporters to get their members onto enough delegate slates to allow Congressman Paul’s name to be placed into nomination in Tampa died last night in Nebraska:

It looks like Ron Paul isn’t going to be officially nominated for the presidency in Tampa.

His backers failed to win a plurality of delegate slots at the Nebraska GOP convention Saturday, leaving the Texas congressman short of the support necessary to have his name placed into contention at the national convention.

According to national party rules, a candidate needs a plurality of the delegates in at least five states to have his name presented for the nomination – by falling short in Nebraska, the last state to hold its convention, Paul came up one state short.

Here’s how Omaha’s newspaper of record put it:

In the end, the Paul revolution in Nebraska got smoked. Paul, a libertarian Texas congressman, won two of the state GOP’s 35 national convention delegates. Romney, the party’s presumptive presidential nominee, won the rest.

“We did it the Nebraska way. In Nebraska, we can have our disagreements but, at the end of the day, we work together,” said Mark Fahleson, state GOP chairman.

Paul’s loss in Nebraska means he will not be guaranteed a speaking role at the Republican National Convention in Tampa, Fla.

It also means Gov. Dave Heineman does not have to worry about being embarrassed in Tampa.

Heineman was the first governor in the nation to endorse Romney. He spent considerable time mobilizing so-called establishment Republicans to back Romney.

“He was personally invested,” Fahleson said of the governor.

Heineman said he simply wanted the delegation to accurately represent Nebraska Republicans, who gave Romney more than 70 percent of their votes in the state’s presidential primary.

“We had a primary process. Mitt Romney won that and Ron Paul didn’t win a single state. I wanted Nebraska to reflect that,” said Heineman, who was not able to attend the state convention because he was at a National Governors Association meeting in Virginia.

In reality, this was never an effort that was officially endorsed by the campaign. Indeed, as I’ve noted before, Paul has told supporters that there was no way he could win the nomination and that he didn’t want them engaging in efforts that would cause problems at the convention in Tampa. Just days before the Nebraska convention, his campaign sent this email:

Just last week, I sent you an email letting you know my staff would be following up with you shortly to tell you everything you need to know about our plans for the Republican National Convention.

My staff has been busy burning up the phone lines, so many of you may have already heard from them.

But because this email is so important, I wanted it to come directly from me.

For several weeks now, I’ve been up front about the fact that Mitt Romney has obtained enough delegates to secure the Republican nomination.

That fact hasn’t changed — and it’s not going to change.

Over the past few weeks, my staff and I have researched the numbers extensively.

We’ve come to the conclusion that even if by some miracle all delegates to the Republican Convention were unbound, I would receive approximately 300 votes at the National Convention — far short of the 1,144 needed to secure the Republican nomination.

It’s also come to my attention recently that many supporters believe a win at the upcoming Nebraska State Convention this Saturday could be an important step for my campaign’s success in Tampa.

While my campaign is hoping to do as well as possible there, I can’t imagine a scenario where my goals or my plans for our REVOLUTION in Tampa would change. They are:

*** Ensuring as many of my delegates as possible are credentialed.

There are many folks in the GOP who want my supporters to just shut up and go away, and they have resorted to every dirty trick in the book to game the system at various state conventions. You and I must ensure that as many of my supporters as possible are credentialed at the Republican National Convention.

By fighting for an internet freedom plank, Audit the Fed, and a plank opposing the indefinite detention of American citizens — and perhaps even opposing the so-called “PATRIOT” Act and undeclared war — you and I can prove we are a growing force in the Republican Party and perhaps convince more GOP elected officials to come our way on these critical issues;

As a National Delegate or Alternate, you’ve invested a lot of your time, talent, and hard-earned money into my campaign and our cause of liberty.

For that I am deeply grateful — and I can’t thank you enough.

I’m looking forward to going to Tampa and celebrating the success of my campaign, and more importantly, our bright future.

So if you haven’t yet done so, please CLICK HERE and register as a delegate or alternate so you can be kept up-to-date on our plans in Tampa.

And if you know of any other delegates in your state, please forward this email to them, as well.

I hope to see you in Tampa.

Obviously, Paul does not want something to happen at the convention that would cause problems, not so much for him (since he’s retiring) as his son. Something tells me his overly zealous supporters, who didn’t really listen to his previous exhortations, are going to comply with the request to be civil.