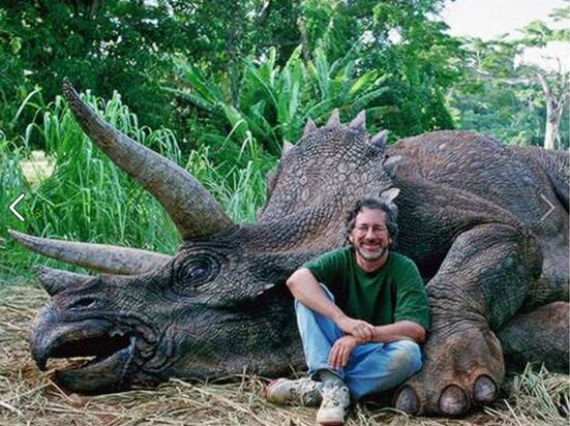 In response to a story that had gone viral last week about a Texas Tech Cheerleader who was posting photographs of herself with wild game she had killed in Africa, apparently on a wildlife preserve where people pay large amounts of money to hunt under the supervision of conservationists, someone posted the above photograph of Steven Spielberg posting with “sick Triceratops” that appeared in one scene of Jurassic Park. Then, the Internet reacted:

No, superstar movie director Steven Spielberg did not poach a dinosaur and then have a picture taken showing him with his trophy kill.

Hard to believe, right? Well, a photo posted on Facebook meant to be satire went viral — being shared more than 30,000 times, because so many people not only believed it was real but also were furious at the “Jurassic Park” director.

The post by Jay Branscomb on his page happened days after Facebook deleted photos from the page of Kendall Jones, a 19-year-old Texas cheerleader and hunter who posted numerous photos of herself posing with a variety of animals that she shot while on safari in Zimbabwe.

The photos sparked massive outrage from animal-rights activists and other Facebook users.

So, Branscomb posted the picture of Spielberg with a mechanical Triceratops on the set of “Jurassic Park,” the 1993 worldwide blockbuster about dinosaurs being brought back to life, with the comment: “Disgraceful photo of recreational hunter happily posing next to a Triceratops he just slaughtered. Please share so the world can name and shame this despicable man.”

Many users did not get the joke and responded accordingly.

“I just reported this picture. I hope you all can join me in stopping these cowards,” one user wrote.

And another: “Disgusting! I bet he only kept the horns!”

Yes, because people who waste Triceratops meat are just the worst.