Today’s edition of What Are Republican Candidates For Office Thinking? comes out of the Hawkeye State:

Republican Iowa Senate candidate Sam Clovis says President Obama’s race is standing in the GOP’s way in their goal to impeach him.

A number of people in the House want to start the process, he said in an interview with The Daily Times Herald in Carroll, Iowa.

“And I think the reason that they’re not is because they’re concerned about the media,” he said.

“Now we have a situation where race is thrown into the cards as well,” Clovis said. “Whether we like it or not, race is an issue.”

To be fair, Cloivs is one candidate in a crowded field for the GOP nomination and, at least according to current polling, unlikely to win the nomination. Nonetheless, he’s a reflection of something I’ve noticed about the hardcore GOP base for awhile now, namely the fact that for them the impeachment of Barack Obama is something that is not only called for, but something that should have happened years ago. Would Congressional Republicans bow to this pressure if they retake the Senate next year? I have a hard time seeing it, in no small part because the GOP leadership in the House and Senate isn’t nearly as nuts as the base. Additionally, it’s blindingly obvious that any effort by the House to impeach the President would end in failure in the Senate just as it did with President Clinton and President Andrew Johnson. Nonetheless, crazier things have happened and one can’t predict what might happen during what is likely to be the hyper-partisan time between the midterms and the Presidential election is anyone’s guess.

The other aspect to these comments, of course, is race. While I would reject any assertion that opposition to President Obama is racially motivated, as well as any suggestion that the majority of conservatives who speak out against the President are motivated by racial animus, it’s hard to deny the role that race has played in at least some of the anti-Obama rhetoric we have seen over the past five years. Some of you may remember the email that circulated shortly after the President was elected in 2008 that depicted a graphic of the White House with watermelons growing on the lawn and laundry hanging from the trees while the theme from The Jeffersons played in the background. And that was probably among the milder of the racially tinged messages that were circulated and, in some cases, continue to be circulated. In addition to jokes, of course, there was the entire birther movement and the persistent claims, mostly by self-identified conservatives, that the President was a “secret Muslim” notwithstanding his own repeated invocations of his Christian faith. Those types of memes were obviously motivated by racial animus. On some level, I suppose we shouldn’t have been surprised by any of that, and indeed it seems as though the President himself at least anticipated some of those reactions before he even announced he was running for President, however it’s depressing nonetheless when it is confirmed openly that racism is still alive and well in the hearts of far too many people. 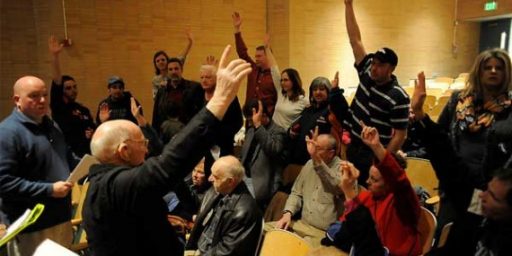 Republicans Dismiss Impeachment As A Democratic Ploy, But May Still Face A Dilemma