iPhones and the US-China Trade Gap

Another example of the silliness of the "trade deficit" concept.

A story in today’s WSJ explains “How the iPhone 6 Fueled a Record U.S. Trade Gap With China.”

Just one more feature of the iPhone 6: It helped fuel a record U.S. trade gap with China in September.

Imports from the Asian giant hit $44.9 billion, up nearly 13% on the month. Most of the $5 billion increase in imports was fueled by a $3 billion surge in buying of cell phones, a deluge that coincided with Apple’s release of the iPhone 6 and 6 Plus, both of which are assembled in China.

It’s not the first #iPhoneEffect: In 2012, iPhone 5 sales were seen boosting U.S. economic growth, a feat that Congress, the White House and the Federal Reserve had difficulty replicating at the time.

But this just shows how silly the “trade gap” concept is. It’s difficult to find precise figures, but the vast majority of the profits on each iPhone sold go to the United States, not China. Going back to 2011, the total cost for the components in each phone were under $200, with Apple netting some $368 per phone. Similar numbers were reported in 2012, when the iPhone 5 launched.

Virtually all of the intellectual property that goes into an iPhone is based in the United States or Western Europe. Almost all of the profit from the vast markup in each unit goes into the pocket of US-based Apple and its stockholders. For that matter, almost all of the ancillary profit on iPhone accessories, apps, wireless plans, and the like are American. Jordan Weissman did an interesting breakdown on how it works with the iPad a couple years back; the principle is the same here:

According to a new report from the National Science Board, [China] rakes in only about as much as Taiwan and far less than South Korea off each device. This pie chart shows the percentage each country contributes to the wholesale price of an iPad, minus the cost of raw materials. 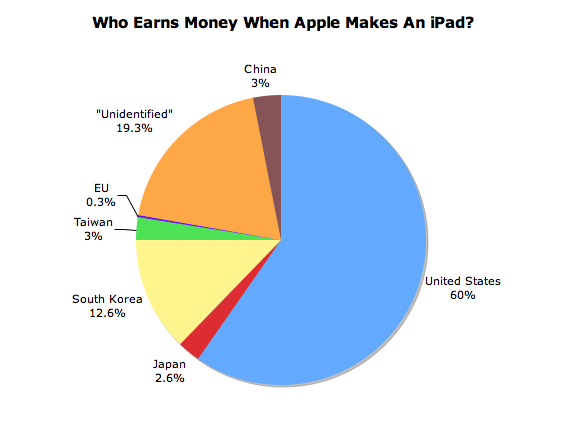 Why is China’s slice so small, and the U.S. slice so big? It’s all about “value added.” That’s the term economists use when they talk about making something worth more than the sum of its parts (or labor). Basic assembly of a small device, the core of China’s manufacturing base during the past decade, doesn’t add much value. Creating a high-tech processor that can be sold at a markup does. Designing and marketing a must-have gadget adds the most value.

For a more in depth breakdown of the data, here is the NSB’s complete table, which is based on research from the University of California — Irvine. The consumer price gets broken down into distribution and retail, value capture, labor, and direct inputs (raw materials). Value capture is essentially the profit after labor is subtracted. For every $499 tablet, the U.S. takes home $162. Countries which manufacture high tech components, particularly South Korea, grab another sizable share. China, which handles the basic task of packing together the final tablet, only grabs about $8 from the process.*

The main reason that iPhones are built in China, it seems, isn’t even cheap labor. One estimate has the cost savings at a mere $4 per phone. Rather, by importing the phones from China, Apple saves a massive amount in taxes. Regardless, it’s silly to pretend that the country that makes $162 on an iPad is running a deficit with the country that makes $8.