Iranian Diplomats To Be Expelled From Great Britain

The British government has reacted pretty quickly to yesterday’s embassy attack in Teheran:

The UK is to expel all Iranian diplomats following the storming of its embassy in Tehran, Foreign Secretary William Hague has announced.

He said he had ordered the immediate closure of the Iranian embassy in London.

Tuesday’s attack by hundreds of protesters followed Britain’s decision to impose further sanctions on Iran over its nuclear programme.

The sanctions led to Iran’s parliament reducing diplomatic ties with the UK.

Mr Hague said he was demanding the immediate closure of the Iranian embassy in London, with all its staff to leave the UK within 48 hours.

“If any country makes it impossible for us to operate on their soil they cannot expect to have a functioning embassy here,” Mr Hague told MPs.

Norway has also closed its embassy in Teheran, purportedly only temporarily but that may depend on how this latest crisis in relations proceeds. 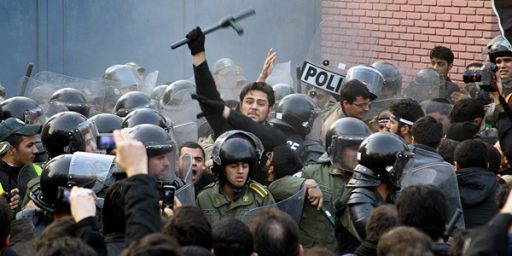