Is Santorum About To Eclipse Gingrich (Again)? 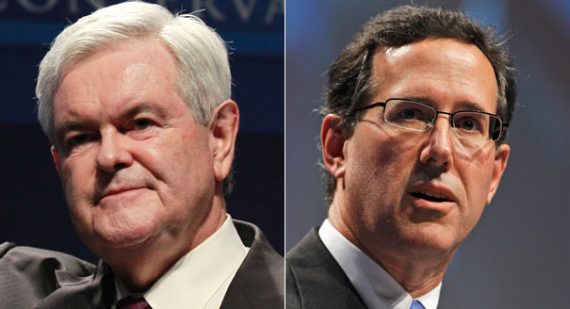 If you can remember back four short weeks ago to just before the Iowa Caucuses, you’ll recall that in late December Pennsylvania Senator Rick Santorum started coming out of nowhere in Iowa to surpass Newt Gingrich, who had been rising in the polls since early December. Santorum ended up winning the Iowa Caucuses by the slimmest of margins, but could not capitalize on his rise in the polls. Nonetheless, he’s stuck in the race and it looks like he might be the guy who puts an end to the Gingrich campaign:

Last night’s results in Nevada were bad news for Newt Gingrich and PPP’s first day of polling in Colorado and Minnesota indicates things may only get worse for him in the coming days.

In Colorado Mitt Romney looks primed for another big Western win to match his  one in Nevada. He leads with 40% there to 26% for Rick Santorum, 18% for Gingrich, and 12% for Ron Paul.

Minnesota looks like a toss up with any of the four candidates having some shot at winning. Santorum holds a small edge there with 29% to 27% for Romney, 22% for Gingrich, and 19% for Paul.

What both states have in common is that Gingrich has fallen precipitously since our last polls in them. In Colorado Gingrich was in first place with a 19 point lead in early December. His support has declined 19 points since then and his net favorability has dropped 33 points from +41 (64/23) to only +8 (49/41). Gingrich has had a similarly large decline in Minnesota, but there it’s much more abrupt.  We polled the state only two weeks ago but in that time he’s dropped 14 points from 36% to 22%, and his favorability has 26 points from +34 (59/25) to +8 (47/39). That after glow from South Carolina has worn off real fast.

Tuesday has the potential to be a big day for Rick Santorum. In addition to these two polls, a Missouri survey we conducted last weekend found him with 45% to 34% for Romney and 13% for Paul. Given how quickly things have moved in this race I wouldn’t assume Santorum still has that lead, especially given the momentum Romney has after big wins in Florida and Nevada. But nevertheless it looks like Santorum has a decent chance at wins in Minnesota and Missouri, and a second place finish in Colorado. 72 hours from now he may have supplanted Gingrich as the top alternative to Romney.
Santorum’s personal likability- perhaps driven by the fact that no one has felt the need to attack him- has a lot to do with why he’s doing so well in these states. In Colorado 68% of voters see him favorably to 21% with a negative opinion. That +47 spread is far better than that of the second most popular candidate, Romney, who’s at +29 (60/31). It’s a similar story in Minnesota. Santorum’s favorability is even better there at +54 (72/18), with Romney next best at +11 (50/39).

If Gingrich ends up following up a blowout by Romney in Florida and Nevada with third place finish in Minnesota and Colorado (Gingrich failed to make the ballot for Missouri’s “beauty contest” primary) then the logic for his campaign will become even more tenuous. As for Santorum, it remains hard to see how he becomes a real competitor to Romney given the fact that he remains woefully behind all the other candidates when it comes to fundraising and organization.

None of this is likely to get Gingrich out of the race, though.  This race is beginning to take on the tone of the 1976 Republican race and the 1984 Democratic race. In both cases, the identity of the nominee was pretty much accepted long before the convention but there was a challenger (Reagan in 1976 and Gary Hart in 1984) who refused to give up and stayed in the race all the way to the convention.  At some point, though, Gingrich is going to become little more than annoying gnat as far as Romney is concerned.