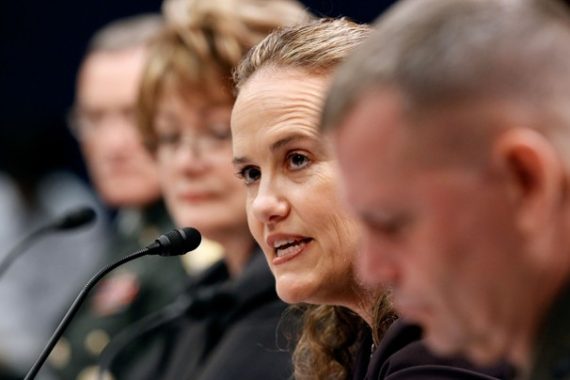 A goodly portion of my Twitter feed is buzzing about a WaPo profile on Michele  Flournoy that I found unremarkable when it was published ten days ago. In particular, they’re honing in on this:

She’s tall and slender with a regal manner. She often wears pearls. Soft-spoken and understated, she is described by her co-workers as brainy rather than blustery. She talks slowly, frequently stopping to think. Her careful speaking style differs wildly from that of Douglas J. Feith, who held her job during the George W. Bush administration and came under fire for his role in building the administration’s case for the invasion of Iraq.

Spencer Ackerman sums of the thoughts of many with a blog post titled “Shit I Wouldn’t Be Able To Tolerate If I Were A Woman.”

The pearls! Dammit, I missed the pearls! And how could I forget to describe Flournoy’s body? I want to apologize to my Washingtonian editor, Shane Harris, for this embarassing lack of judgment. I figured it was more important to delve deeply into Flournoy’s ideas and career history, and otherwise explain why she’s likely to become defense secretary someday. Of course, the pearls explain it all.

If I was a woman working in the national security field, this kind of shit would have me climbing up a clock tower with a clean rifle. Why is a woman subcabinet official getting profiled in the Post’s Style section, anyway? Is it really not possible to grapple with this woman’s ideas because she’s wearing pearls? Really? When you start from the premise that Flournoy’s going to run the Pentagon someday, shouldn’t that incline you to explore whether that’s, like, a good idea?

But, as Spencer has already noted, this is in the Style section. The offending passage is on page 2 of 4 of a feature on Flournoy’s rise, focusing on her transformation into the most powerful woman in Pentagon history from the improbable beginning as a kid at Beverly Hills High School who went to school with Shaun Cassidy and whose dad was a cinematographer on “The Odd Couple.”

It’s true that women get a lot of this sort of treatment in press coverage. Hillary Clinton, Sarah Palin, and Michele Bachmann come quickly to mind as significant political figures whose appearance and style get outsized attention.

But feature-type pieces  routinely rely on novel-style description, even when dealing with powerful male figures. For example, a recent Esquire piece on Jon Huntsman sets the scene thusly:

He’s built like a long-distance runner. He’s wearing a dark suit, a white shirt, a blue tie. His graying hair is neatly parted. He looks rich, which he is.

Huntsman might look like HBO’s version of a president — flagpole posture, great hair, lean face — but he gives the impression that his potential tenure would make for the most boring movie imaginable. A Jon Huntsman presidency would be a mathematical proof. It would be like watching water without waves.

A piece from over the weekend on Mitt Romney from the Independent begins:

If you created an identikit portrait of the ideal candidate for the American presidency, you’d come up with something pretty close to Willard Mitt Romney.

First of all, his pedigree – his father was George Romney, business magnate, governor and presidential candidate in his time, and idolised by the son whose career uncannily mirrors his own. Mitt looks the part, too. At 64, he’s slender and handsome, his dark hair flecked with white on the sideburns. Indeed, in 2002, People magazine named him one of the 50 Most Beautiful People in the World.

His family, it goes without saying, is also picture perfect. Ann, his wife of 42 years, not only has borne him five equally handsome sons; she is a remarkable woman in her own right, who has overcome cancer and multiple sclerosis.

Every third piece on Rick Perry mentions his hair; an even higher proportion of the pieces on Tim Pawlenty and Mike Spence mentioned their lack of it.

The bottom line is that even respectable media outlets have style and gossip sections and otherwise focus on “light” fare in addition to more substantive commentary. Defense policy wonks are decidedly not the audience for most articles in the Washington Post. That’s almost surely a shrewd strategy given how few of us there are.