The new Red Dawn promises to be even sillier than the first. 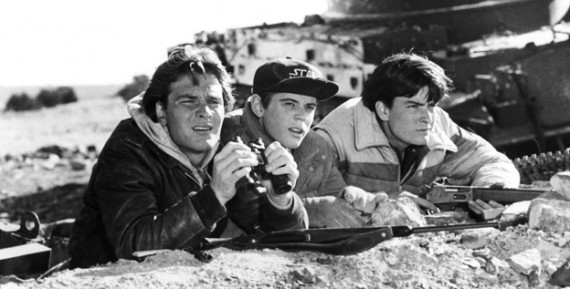 A remake of the mid-80s cult classic movie Red Dawn, in which a group of Colorado teenagers singlehandedly defeat the Soviet-Cuban military force that has taken over their town as part of an invasion of the United States, has been in the works for several years ago. Last year, we learned that the writers had decided to change the script they had drafted to make the invaders North Korean instead of Chinese. Some people on the right saw that as evidence that the studio was afraid of offending the Chinese, although the fact that China is a growing market for American movies seems to have escaped them. In any event, the movie is set to come out in November, and Wired’s David Axe argues that it may well be the dumbest movie ever:

No, these are not images from some teenage gamer’s fever dream. They’re scenes from the movie Red Dawn, a remake of the 1984 cult classic about a joint Cuban-Soviet invasion of the U.S. and the attractive young American insurgents — the Wolverines — who help defeat it. The revamped Red Dawn, starring Chris Hemsworth, a.k.a. Thor, blasts into theaters in November.

But don’t expect it to linger very long. Where the 1984 original successfully played upon widespread public fears over a supposedly rising and belligerent Soviet Union, the remake expects viewers to take North Korea seriously as an existential threat. We’re guessing the flick is going to get a lot of unintended laughs.

You see, the actual North Korea is a country of 24 million people with a GDP roughly equal to North Dakota’s. It’s an impoverished, even starving, prison state that lacks modern weaponry and any ability to deploy forces globally. If preview clips posted this weekend are any indication, the movie magically gifts North Korea with a huge fleet of long-range transport planes … because it has to. Of course, how these planes get past the U.S. military’s 3,000 jet fighters is anyone’s guess.

In any event, John Milius, the writer of the original Red Dawn, called the remake “a stupid thing to do.”Although not formally associated with the new production, Milius was offered a chance to read the screenplay. “It’s all about neat action scenes and has nothing to do with story,” Milius griped. Coincidentally, Milius is credited (though not without controversy) with penning the backstory for the video gameHomefront, a military adventure about — you guessed it — a North Korean invasion of the U.S.

Let’s be honest, now. The original Red Dawn left much to be desired in the way of geopolitical realism itself. The idea that the Soviet Union and Cuba (with some apparent assistance from an Arabic nation that was probably meant to be Libya) could launch a transcontinental land invasion of the United States that would succeed rather than seeing its supply lines utterly destroyed by American naval and air forces was silly. Even in the context of the mid-1980s, the idea that the Soviets/Cubans could have pulled that off and that the U.S. military would have been so easily defeated as to essentially cede 1/3 of the Continental United States to the enemy, not to mention the question of why nuclear weapons were never used in that movie. In any event, though, it was an entertaining movie and I’ve watched it a few times as it has come up on cable or some such place. It gave us a classic rallying cry in “Wolverines!,” and it was one of the first big movies for stars of the future like Patrick Swayze, Lea Thompson, Jennifer Grey, and Charlie Sheen.  The real question, of course, is why anyone thought there was a need to remake a cult classic like this. The obvious answer, of course, is that it’s part of the sad new world of Hollywood where recycling old ideas, or turning television shows and comic books into movies, seems to be the formula studios believe that they have to follow to make a blockbuster.  If Steven Spielberg were entering the business today, the studios would likely be trying to convince him to direct the new movie version of “Full House” or something.

Axe is correct, of course, that the idea of a North Korean invasion of the United States is utterly silly. How would they even get the troops the roughly 6,000 miles across the Pacific? And, again, wouldn’t they have a little problem called the Pacific Fleet to deal with? Besides if a North Korean soldier suddenly parachuted into a suburban American community, the first thing he’s likely to do is surrender and ask to be taken to the nearest McDonalds. It’s an absurd premise and, combined with the fact their using mostly unknown actors, suggests that the film is going to royally suck.  In all likelihood I’ll wait till this thing is on DVD and get it for a dollars from RedBox or something.

Is it the dumbest movie ever? That I’m not sure of. I’ve seen some pretty dumb movies in my time, including a few that I’ve stopped watching on DVD less than an hour into the film and two occasions where the stupidity was so bad that I just had to leave the theater. The premise of this movie is ridiculously stupid, but sadly that’s true of much that Hollywood produces these days. The original Red Dawn was silly, but it was a fun movie. This one just sounds stupid.