Is the U.S.-European Relationship Really in Decline?

My latest piece for The Atlantic, "Is the U.S.-European Relationship Really in Decline?" is posted. 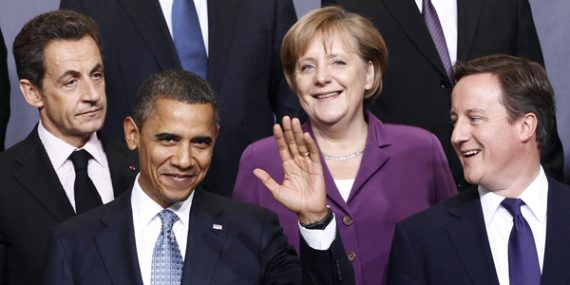 My latest piece for The Atlantic, “Is the U.S.-European Relationship Really in Decline?” is posted. An excerpt:

[I]f it ever existed, the Unipolar Moment that Charles Krauthammer and others saw in the aftermath of the Soviet collapse is over. But that multipolar dynamic actually makes transatlantic cooperation more, not less, important. A hegemon needs much less help than one of many great powers, even if it remains the biggest.

Take the G-20. Seven of the members are NATO Allies: the US, Canada, France, Germany, Italy, the UK, and Turkey. Toss in the EU, and you have 40 percent of the delegation. If they can form a united front at G-20 summits, they are much more powerful than if each stands alone. Add in four NATO Partner countries (Russia, Japan, Australia, and South Korea) and you’re up to 60 percent of the delegation — a comfortable majority for the U.S.-European partnership and its circle of closest allies.

Granted, it’s unlikely that we’ll achieve consensus among all 12 states on any one issue, let alone most issues. But constantly working together toward shared goals and values expands a sense of commonality.

And, like so many things, projects end. Indeed, that’s generally the goal. The transatlantic military alliance that formed to defeat fascism remained intact after victory; indeed, it expanded to include its former German and Italian adversaries. NATO outlasted the demise of its raison d’être, the Soviet threat, and went on to fight together –along with many of its former adversaries — in Bosnia, Kosovo, Afghanistan, and Libya. Is there seriously any doubt that other challenges will emerge in the future in which the Americans and its European allies might benefit from working together?