Is ISIS's reach about to exceed its grasp? 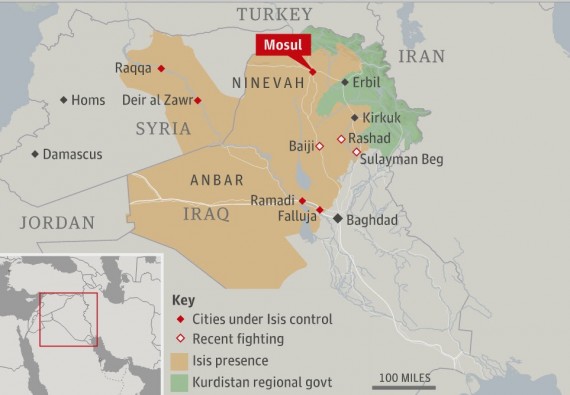 The terrorist group that has ravaged much of Iraq for the past month has declared an Islamic Caliphate and is calling on all Muslims to rally to its cause:

BAGHDAD — The extremist group battling its way through swaths of Iraq and Syria declared the creation of a formal Islamic state Sunday, building on its recent military gains and laying down an ambitious challenge to al-Qaeda’s established leadership.

In an audio statement posted on the Internet, the spokesman for the Islamic State of Iraq and Syria announced the restoration of the 7th-century Islamic caliphate, a long-declared goal of the al-Qaeda renegades who broke with the mainstream organization early this year and have since asserted control over large areas spanning the two countries.

The move signifies “a new era of international jihad,” said the spokesman, Abu Mohammed al-Adnani, who also declared an end to the Islamic State of Iraq and Syria, as the group had called itself.

Henceforth, ISIS will simply be known as the Islamic State, in recognition of the breakdown of international borders achieved as a result of the group’s conquests, he said. ISIS’s chief, an Iraqi known as Abu Bakr al-Baghdadi, will be the caliph, or leader, of the new caliphate, and all Muslims worldwide will be required to pay allegiance to him.

The proclamation is a powerful challenge to al-Qaeda’s chief, Ayman al-Zawahiri, who also claims supremacy over the global jihadist movement. Zawahiri repudiated Baghdadi early this year after the Iraqi leader rejected repeated al-Qaeda directives to adopt a more inclusive approach toward other jihadist groups, and it is unlikely that he will agree to bow to the authority of the proclaimed new caliph.

“This is a threat to the legitimacy of al-Qaeda as the representative of global jihad, and it lays down the threat big time,” said Charles Lister of the Brookings Doha Center in Qatar. “Put simply, Abu Bakr al-Baghdadi has declared war on al-Qaeda.”

Some jihadist groups operating in other parts of the region may be tempted to switch allegiance to the new Islamic state; such a state is also a proclaimed goal of al-Qaeda but one that the parent organization has said should be implemented only once conditions are right.

Others, however, may be deterred by the power grab. The audio statement declares Baghdadi to be the “Emir of the Momineen,” or “Prince of the Believers,” a title that effectively endows him with the legacy of the leadership of the prophet Muhammad, the founder of Islam.

It is not clear, either, whether some of the other Sunni revolutionary movements fighting alongside the militants against the Iraqi government — many of which are fiercely nationalistic — will accept the Islamic State’s explicit rejection of national boundaries, including those of Iraq.

“This could potentially risk the Islamic State’s overall position within the Sunni uprising in Iraq,” Lister said.

The state will cover lands now under Islamic State control, stretching from the northern Syrian province of Aleppo to the eastern Iraqi province of Diyala, the statement said, adding that eventually it will grow to include the entire Muslim world. The militants have already asserted a de facto Islamic state in those areas, establishing their own courts, schools and services. The effort has received a big boost in the past three weeks from the vast quantities of weaponry the militants have taken from Iraqi army bases and the millions of dollars they have seized from banks in the towns and cities they have overrun.

CBS News’s take on the story also plays up the possibility that this could lead to infighting:

The al Qaeda breakaway group that has seized much of Syria and Iraq has formally declared the establishment of a new Islamic state, demanding allegiance from Muslims worldwide in a move that could further strain relations with other militant groups.

With brutal efficiency, the Sunni extremist group has carved out a large chunk of territory that has effectively erased the border between Iraq and Syria and laid the foundations of its proto-state. But Sunday’s declaration, made on the first day of the Muslim holy month of Ramadan, could trigger a wave of infighting among the Sunni militant factions that formed a loose alliance in the blitz across Iraq.

The spokesman for the the Islamic State of Iraq and Syria (ISIS), declared the group’s chief, Abu Bakr al-Baghdadi, as the leader of the new caliphate, or Islamic state, and called on Muslims everywhere, not just those in areas under the organization’s control, to swear loyalty to him.

“The legality of all emirates, groups, states and organizations becomes null by the expansion of the caliph’s authority and the arrival of its troops to their areas,” said the spokesman, Abu Mohammed al-Adnani, in an audio statement posted online. “Listen to your caliph and obey him. Support your state, which grows every day.”

The greatest impact, however, could be on the broader international jihadist movement, in particular on the future of al Qaeda.

Founded by Osama bin Laden, the group that carried out the Sept. 11 attacks on the U.S. has long carried the mantle of the international jihadi cause. But the Islamic State has managed to do in Syria and Iraq what al Qaeda never has – carve out a large swath of territory in the heart of the Arab world and control it.

“This announcement poses a huge threat to al Qaeda and its long-time position of leadership of the international jihadist cause,” said Charles Lister, a visiting fellow at the Brookings Doha Center, in emailed comments. “Taken globally, the younger generation of the jihadist community is becoming more and more supportive of (the Islamic State), largely out of fealty to its slick and proven capacity for attaining rapid results through brutality.”

Al-Baghdadi, an ambitious Iraqi militant who has a $10 million U.S. bounty on his head, took the reins of the Islamic State in 2010 when it was still an al-Qaeda affiliate based in Iraq.

But al-Baghdadi’s stature has only grown since then, as the Islamic State’s fighters have strengthened their grip on much of Syria, and now overrun large swathes of Iraq.

In Washington, the Obama administration called on the international community to unite in the face of the threat posed by the Sunni extremists.

“ISIL’s strategy to develop a caliphate across the region has been clear for some time now. That is why this is a critical moment for the international community to stand together against ISIL and the advances it has made,” State Department spokeswoman Jen Psaki said.

The Islamic State’s declaration comes as the Iraqi government tries to wrest back some of the territory it has lost to the jihadi group and its allies in recent weeks.

Based on most of the reaction I am seeing to this announcement is that it is somewhat more aspirational than something that threatens to destabilize the Syria/Iraq region in the near future and lead to the creation of a new cross-border state. For one thing, as the map above shows, it’s unclear just how much of the territory that ISIS claims is under its direct control or under the control of forces that have agreed to cooperate with the organization for what would obviously be self-interested reasons. To the extent that it is the later, ISIS obviously leaves itself open to a betrayal in the rear as it continues the fight in Iraq, especially from forces that could potentially be bribed into switching sides as is often the case in these types of situation. Even in former situation, though, ISIS’s control isn’t necessarily solid. It’s been noted before that the organization’s actual available forces, while not known in detail, don’t appear to number more than 20,000 people. While that is not insubstantial force, it would certainly not be enough to hold on to territory in the fact of a determined onslaught, especially if supplies are cut off. So, this announcement of the return of an Islamic Caliphate, which essentially has not existed since the Sultan was deposed at the end of the Ottoman Empire, seems a lot less foreboding than the announcements and indeed some of the analysis have made it out to be.

In the near term, the worrisome question for the west will be the extent to which other terror groups proclaim loyalty t0 ISIS now. The best of all possible worlds, of course, would be if this intensifies the rivalry between ISIS and al Qaeda and its affiliates that they actually start fighting each other. In that case, it would be far better for them to be going after each other than going after targets in the West. Add in the fact that the Islamic Republic of Iran is likely to have something to say about the group’s declaration of being the sole political authority for Islam and we’ve got a situation where a bunch of really bad people could end up fighting each other instead of attacking the West. Quite honestly, if there was some way we could reliably encourage this outcome via covert action it might be worth giving it a try.