The Israeli Navy stopped and boarded a second boat delivering aid to Gaza, fortunately without the outcome that occurred the last time:

IDF navy forces boarded and took control of the MV Rachel Corrie Saturday afternoon. The troops did not meet any resistance from activists attempting to break the Gaza blockade, and the operation was completed without violent incidents.

The military said its forces boarded the 1,200-ton cargo ship from the sea, not helicopters. Army spokeswoman Lt. Col. Avital Leibovich said Saturday’s takeover took only a few minutes and that the vessel was being taken to Ashdod port.

Prior to the takeover, three navy ships tailed the aid boat for several hours throughout the morning, a few dozen kilometers from the blockaded Strip. The army said it had contacted the boat four times and urged its passengers to divert to Ashdod, but the activists had repeatedly refused.

The IDF had said that it would have no choice but to board the ship if it did not agree to go to Ashdod.

Earlier reports had suggested that the Rachel Corrie had already been boarded in the early morning, but the army and the boat’s passenger’s later said this was not true.

The ship was trying to breach the three-year-old blockade to deliver a load of aid to the coastal territory.

“There were two warships in the back of them … and a smaller boat was approaching,” said activist Greta Berlin of the Free Gaza movement, which sent the ship. She was speaking from the movement’s headquarters in Cyprus and was citing a passenger on board.

The military said it had made contact with the boat and notified it that it was approaching an area under blockade. The navy had told the Rachel Corrie that “The Israeli government supports delivery of humanitarian supplies to the civilian population in the Gaza Strip and invites you to enter the Ashdod port. Delivery of the supplies … will be done via the formal land crossings and under your observation.”

Activists on board the Irish boat insisted they would not resist if Israeli soldiers tried to take over their vessel. They rejected Israeli and US appeals to bring the ship to Ashdod.

Foreign Ministry director Yossi Gal told reporters Israel has “no desire to board the ship. If the ship decides to sail to the port of Ashdod, then we will ensure its safe arrival and will not board it.”

Even more so than the first flotilla, it was fairly obvious that the Rachel Corrie’s efforts to run the blockade were more symbolic than anything else. The difference this time is that, unlike the people on the flotilla, these passengers were wise enough to know that challenging the Israeli Navy is a rather dumb move, and the Israelis were smart enough to know that rapelling off of helicopters was just a little bit of overkill.

This isn’t the end of the story, I suspect. Turkey has been hinting for days that more aid boats will be sent to Gaza and that Turkish naval ships will accompany them. The prospect for a confrontation in the Mediterranean remains. 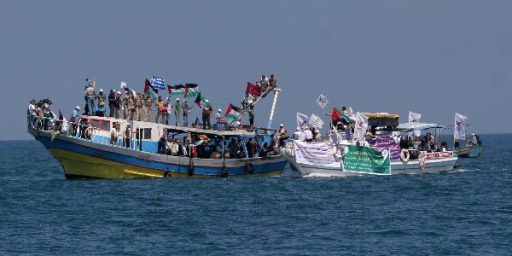