Italy Passes Point of No Return 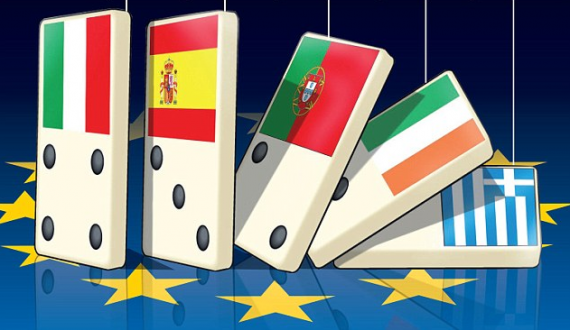 My latest for the New Atlanticist, “Italy Too Big To Fail, Too Big to Save,” explores the fact that overnight, Italy has replaced Greece as the poster child for the Eurozone crisis.

I’ve for some time been bemused that journalists and other informed observers are shocked as each new European country follows Greece in crisis. After all, the acronym PIGS has been around since the 1970s and PIIGS, adding Ireland, has been with us for years. It’s not only a useful mnemonic device, it’s a roadmap.

Nonetheless, the rapid implosion in Italy has taken almost everyone by surprise. The yields on 10-year Italian bonds has topped 7 percent overnight “the highest level since the adoption of the euro 10 years ago and close to levels that have required other euro zone countries to seek bailouts.” Barclay’s Capital has proclaimed, “Italy is now mathematically beyond point of no return.” Their analysts Jeff Meli, Jigar Patel, and Justin Luther conclude, “While reforms are necessary, in and of itself will not be enough to prevent crisis,” adding, “Growth and austerity will not be enough to offset cost of debt.” They explain, ” on our estimates, yields above 5.5% is inflection point where game is over, with the danger being that high rates reinforce stability concerns, leading to higher rates, which sees a deeper conviction of a self sustaining credit event and eventual default.”

Almost all analysts point in the same direction: The European Central Bank.

Ambrose Evans-Pritchard says Merkel must be made to acquiesce to “mobilizing the full-firepower of the ECB – with a pledge to change EU Treaty law and the bank’s mandate – and perhaps some form of quantum leap towards a fiscal and debt union.” Paul Krugman thinks what’s needed is “radical change in policy by the European Central Bank” and proclaims “that the ECB rate hike earlier this year will go down in history as a classic example of policy idiocy. We would probably still be in this mess even if the ECB hadn’t raised rates, but the sheer stupidity of obsessing over inflation when the euro was obviously at risk boggles the mind.” The Barclay’s analysts urge, “We think ECB needs to step up to the plate, print and buy bonds” but concedes “at the moment ECB remains unwilling to be lender of last resort on the scale needed.”

Alas, the competition for most optimistic analyst has no entrants.

Evans-Pritchard declares, “The EU Project has become both dangerous and insane.” Krugman concludes, “I still find it hard to believe that the euro will fail; but it seems equally hard to believe that Europe will do what’s needed to avoid that failure.” Wolf  is even less cheery: “If policymakers had understood two decades ago what they know now, they would never have launched the single currency. Only fear of the consequences of a break-up is now keeping it together. The question is whether that will be enough. I suspect the answer is, no.”

Financial analyst Thanos Vamvakidis offers the most pithy assessment: Italy is “too big to fail, too big to save.”

Image based on graphic from Daily Mail.