It’s a Small World, After All!

This photo is making the rounds: 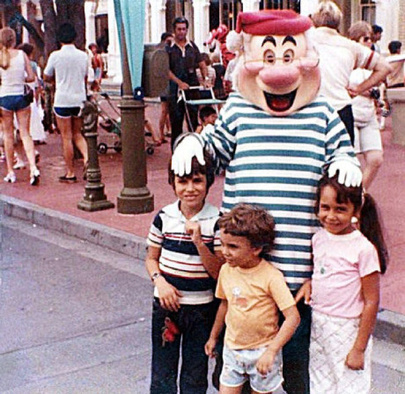 The odds are astronomical: 30 years ago, when Alex and Donna Voutsinas lived in different countries and long before they met and married, they were captured in the same photo at Disney World. That's Donna at right in front. Alex is in the stroller in the background immediately behind Mr. Smee.

The Star apparently broke the story:

No one knows better than Alex and Donna Voutsinas that it’s a small world after all.

Thirty years ago, when they lived in separate countries long before they met and married, a family shot of little Donna at Walt Disney World captured Alex in a stroller in the background.

“It just blew our minds when we realized,” Alex Voutsinas, a 32-year-old transplanted Montrealer told the Star Thursday from south Florida.

“I got chills. It was just too much of a coincidence. It was fate.”

That fateful realization came just one week before their wedding eight years ago. Alex and Donna had been going through old family snapshots. There, in the blurry background of a picture of 5-year-old Donna was 3-year-old Alex being pushed down Main Street at the same moment in 1980 by his father. The senior Voutsinas’s distinctive jet-black hair with its white tuft caught his eye.

“My mother pulled out albums from the same trip. My dad is wearing exactly the same outfit.”

Other pictures from that trip showed Alex on his dad’s shoulders. The boy in the background of Donna’s picture and the boy in those pictures were the same.

I suppose that, in the grand scheme of things, this isn’t all that freakish.  Lot’s of people go to Disney World and it’s not like the couple were cozing up to the same dwarf.  Still, pretty wild.

Via Chris Brogan via  Neatorama