The military threat is smaller, but the political one is bigger. 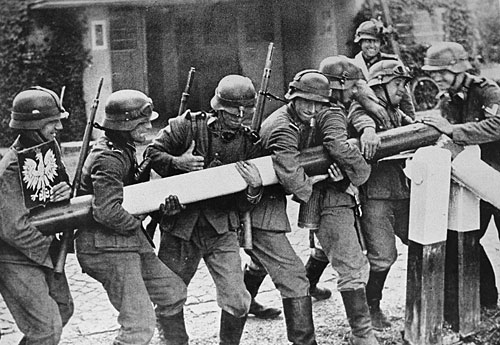 Some of the commentaries about Russia’s invasion of Ukraine have been making inevitable historical comparisons. Clearly, we’re in a moment, like 1939, in which an autocrat has decided to ignore the foundations of the international order to impose his will on his neighbors. While from a military perspective, the threat of invasion of more countries is far less, the political weaknesses that Putin is exploiting are far worse.

Russian in 2022 is following the same playbook as Germany in 1939: make bogus claims about provocations, then invade. However, it does not have the military strength to effectively occupy Ukraine indefinitely, the way that Germany occupied Poland (or its part of Poland, since Stalin invaded the other part, and held it until Operation Barbarossa). It appears, from Putin’s statements, that he wants to depose the democratic government of Ukraine, purge the country of any opposition to Russian dominance, and erect a puppet regime. After that, it’s anyone’s guess how much armed and unarmed resistance that regime will face, and how much military support Russia will give. However, if Putin wants to wave the Russian military sword against other Eastern European countries, in pursuit of further creating a Russian sphere of influence, he can’t commit all the forces currently invading to a permanent occupation. While the threat of some military action against Russia’s other neighbors is certainly credible, we’re not facing the 1939 scenario of a huge war machine making blitzkrieg attacks and occupying one European nation after another. Though, again, a large Russian military, hiding behind its nuclear shield, attacking the Baltic States and other countries is still a scary prospect.

In his book The Meaning of Hitler, Sebastian Haffner credited Hitler with a vulture’s genius for spotting weakness. Putin, too, has clearly identified the weaknesses in the current world, from the indecision and hesitation of Western countries in effectively opposing his actions in George and Ukraine, to the vulnerability of Western democracies to misinformation and polarization. Those political weaknesses are, today, worse than they were in 1939. Certainly, Western democracies had their homegrown fascists, such as Oswald Mosley and the German American Bund. American isolationism didn’t help, either. But Western opposition to Hitler was never complicated the way that Western opposition to Putin is, particularly in the United States.

There are certainly some similarities between 1939 and 2022. We had our popular public figures, such as Charles Lindbergh and Father Coughlin, who were sympathetic to or supportive of the Nazis. We had loud, numerous voices railing against foreign entanglements. We had people dissatisfied with the American political order, from Communists to fascists, who wanted to overturn it. But we did not have as large a dictator-friendly, insurrectionist-friendly, conspiracy-addled collection of Americans as we do now. Nor did we have a former President of the United States, acting as the de facto leader the Republican party and the pro-autocrat, anti-democratic movement, accelerating and expanding these sentiments. Nor did people who express these sentiments have as large and loud a megaphone.

We must stand with Ukrainians in this dark hour. We must do everything we can to help them. But the “we” excludes people here at home who share Putin’s worldview, in which a combination of raw power and naked lies is the proper way to govern a country, and have similarly cynical and Hobbesian perspectives on the international system. That’s a very different sentiment than, say, many of the isolationists of the 1939, who wanted to preserve American democracy and general prosperity from the risks that foreign entanglements might create. We have always debated how far beyond the water’s edge we should draw the line for American security. We’re now also far more divided over the basic principles on which our own political order is founded, as well as the international order. Putin certainly saw that division, having nourished it, and factored it into his calculations. And all of that is what makes 2022 a scary time in which to live.