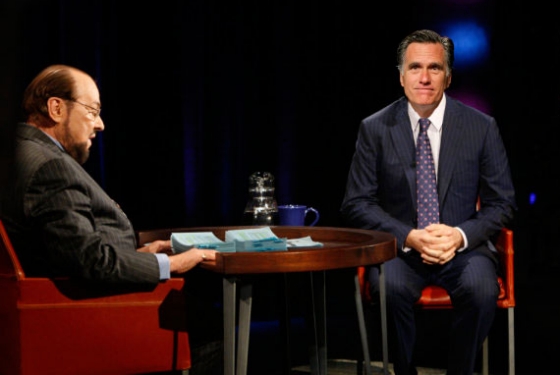 “Inside the Actors Studio” host James Lipton tells Mitt Romney to stop trying so hard to act like a regular guy.

New York Magazine (“How to Act Human: Advice for Mitt Romney From Inside the Actors Studio“)

A few months ago, Brian McFadden’s weekly comic strip in the Sunday Timesoffered ways for Mitt Romney to improve his image. One panel showed him with me on the set of Inside the Actors Studio, under the heading “Take Acting Lessons to Appear More Relatable.”

Initially amused by this unsolicited enlistment, I’ve found myself returning spontaneously and with increasing frequency to the task, sometimes starting awake in the middle of the night with acting advice for the candidate. Convinced that the only way to exorcise this possession is to confront it, I offer the following counsel.

A key excerpt for those who can’t or won’t watch the video:

As worthy as the real Romney may be, he is not, has never been, and never will be the common man, and when he assumes the role in a crowd, his evident discomfort tells us that this guy doesn’t fly coach, much less go Greyhound, and, without the demands of “running for office,” wouldn’t be spending much time with these people who do.

Of course he’s within his rights. As he’s taken to pointing out, there’s nothing wrong with being rich. But one wouldn’t cast Henry Fonda in Bringing Up Babyor Cary Grant in The Grapes of Wrath. Miscasting matters – in drama and politics – and absent a miraculous Brando-level acting performance, Mr. Romney’s going to continue to fall victim to self-consciousness, the actor’s worst enemy.

Ronald Reagan wasn’t an authentic common man either, but he was an authentic SAG-card-carrying actor. For one unforgettable afternoon, I directed him and Bob Hope in the Lincoln bedroom, and he acquitted himself with patently genuine warmth and skill – to the point of exchanging jokes so blue, during a break to relight for his exit, that none of them can be recorded here. He and Bob roared with laughter, and the laughs were real, unaffected, and authentic enough to merit the complimentary label “Reaganesque.”

The lesson of Reagan is that, whatever his politics and legacy, there was always only one of him. Even with all his theatrical experience, he never essayed a dual role. So, for what it’s worth, my advice to Mr. Romney is this: Since the evidence indicates that you lack the skills to simulate what you’re not, you should stick to typecasting and go with what you’ve got and who you are. It’s not just your best option, sir, it’s your only one.

So many recent candidates, ranging from Bob Dole to Al Gore* to John Kerry to John McCain, have lost elections while trying to convince people that they were someone they weren’t. To be sure, they might well have lost them anyway. But at least going down being true to your own character has a certain satisfaction.

______
*Al Gore always deserves an asterisk in these contexts since, after all, he got more votes than the guy who won the election. Still, given the incredible closeness of the contest, there’s a decent chance that eliminating even one of the mini controversies–from “earth tones” to “Love Story”–that gave him the reputation as a man constantly trying to reinvent himself would have made the difference.