Japan was rocked by a massive earthquake, which in turned spawned a tsunami.

Japan was rocked by a massive earthquake, which in turned spawned a tsunami. Details are still sketchy.

A massive earthquake has hit the north-east of Japan, triggering a tsunami that has caused extensive damage.

Japanese television showed cars, ships and even buildings being swept away by a vast wall of water after the 8.9-magnitude earthquake.

The quake has sparked fires in several areas including Tokyo. At least 32 people were killed, officials said.

It struck about 250 miles (400km) from the capital at a depth of 20 miles. There have been powerful aftershocks.

The tremor, measured at 8.9 by the US Geological Survey, hit at 1446 local time (0546 GMT). Seismologists say it is one of the largest earthquakes to hit Japan for many years.
A tsunami warning was extended across the Pacific to New Zealand in the south and North and South America to the east.

The Red Cross in Geneva warned that the tsunami waves could be higher than some Pacific islands, Reuters news agency said.

Coastal areas in the Philippines, Hawaii and other Pacific islands were evacuated ahead of the tsunami’s expected arrival.

A devastating tsunami hit the coast of northeast Japan on Friday in the aftermath of an 8.9 magnitude earthquake about 80 miles offshore, killing at least 23 people and injuring many more. The earthquake triggered widespread power blackouts, and countries across the Pacific Ocean, from Russia to South America and including Hawaii and the West Coast of the United States, braced for possible tsunami waves.

Prime Minister Naoto Kan said the disaster caused major damage across wide areas, The Associated Press reported. But he said there had been no leakage of radiation or radioactive material from nuclear facilities..

The most powerful earthquake to hit Japan in at least 100 years unleashed walls of water that swept across rice fields, engulfing towns, dragging houses onto highways and tossing cars and boats like toys.

Local media reported at least 32 deaths, with more casualties feared. And the 8.9-magnitude quake, which struck at 2:46 p.m., prompted the U.S. National Weather Service to issue a tsunami warning for at least 20 countries.

The quake’s epicenter was 373 kilometers (231 miles) away from Tokyo, the United States Geological Survey said.

But residents there continued to feel aftershocks hours after the quake. More than 30 aftershocks followed, with the strongest measuring at 7.1.

Thankfully, Japan is a modern economy and has learned the hard way about the need for building codes. But these are massive twin disasters and they’ll reverberate around the region.

In Philippines alone, the tsunami is expected to hit in the early morning and the government has evacuated 20 provinces along the coast.

Authorities in at least 20 countries and numerous Pacific islands issued tsunami warnings, the National Weather Service said. The wide-ranging list includes Russia and Indonesia, Central American countries like Guatemala, El Salvador and Costa Rica and the U.S. state of Hawaii, where warning sirens were sounded in the morning. A tsunami warning was also issued for areas along the United States and Canadian west coasts

The tsunami could cause damage “along coastlines of all islands in the state of Hawaii,” warned the U.S. National Oceanic and Atmospheric Administration. “Urgent action should be taken to protect lives and property.”

The quake Friday was the fifth-strongest in the world since 1900, the agency said and the most powerful to hit Japan since then.

More as this develops. 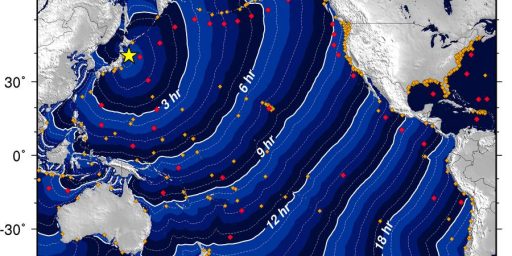