Jean Stapleton, an accomplished stage and screen actress who achieved entertainment immortality playing opposite Carroll O'Connor as Archie Bunker's long-suffering wife Edith, has died at the age of 90: 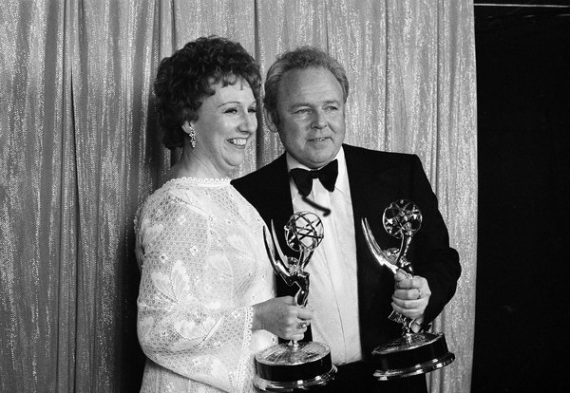 Jean Stapleton, an accomplished stage and screen actress who achieved entertainment immortality playing opposite Carroll O’Connor as Archie Bunker’s long-suffering wife Edith, has died at the age of 90:

Jean Stapleton, an actress whose portrayal of a slow-witted, big-hearted and submissive — up to a point — housewife on the groundbreaking series “All in the Family” made her, along with Mary Tyler Moore and Bea Arthur, one of the foremost women in television comedy in the 1970s, died Friday at her home in New York City. She was 90.

Her death was confirmed by her agent, David Shaul.

Ms. Stapleton, though never an ingénue or a leading lady, was an accomplished theater actress with a few television credits when the producer Norman Lear, who had seen her in the musical “Damn Yankees” on Broadway, asked her to audition for a series. The audition, for a character named Edith Bunker, changed her life.

The show, initially called “Those Were the Days,” was Mr. Lear’s adaptation, for an American audience, of an English series called “Till Death Us Do Part,” about a working-class couple in east London who had reactionary and racist views.
It took shape slowly. The producers filmed three different pilots, the show changed networks to CBS from ABC, and Ms. Stapleton acted in a film directed by Mr. Lear, “Cold Turkey,” before “All in the Family,” as it came to be known, was broadcast in January 1971. Then, for three or four months, hampered by mixed reviews, the show struggled to find an audience, but when it did, it became one of television’s most popular programs, finishing first in the Nielsen ratings for five consecutive seasons and winning four consecutive Emmy awards for outstanding comedy series. Ms. Stapleton won three Emmys of her own, in 1971, 1972 and 1978.

“All in the Family” was set in Queens, where most of the action took place in the well-worn but comfortable living room of the Bunker family, led by an irascible loading-dock worker named Archie whose attitudes toward anyone not exactly like him – that is, white, male, conservative and rabidly patriotic – were condescending, smug and demonstrably foolish. Memorably played by Carroll O’Connor, Archie bullied his wife, patronized his daughter, Gloria (played by Sally Struthers), and infuriated and was infuriated by his live-in son-in-law, a liberal student, Michael Stivic (played by Rob Reiner), whom he not so affectionately called Meathead.

Before she became Edith Bunker, a role for which she won three Emmy Awards, and for many years after she left the show, Stapleton enjoyed an accomplished career on the on the stage and in movies:

Jeanne Murray was born in Manhattan on Jan. 19, 1923. Her father, Joseph, was an advertising salesman; her mother, Marie Stapleton, was a concert and opera singer, and music was very much a part of her young life. Young Jeanne was a singer as well, which might be surprising to those who knew Ms. Stapleton only from “All in the Family,” which opened every week with Edith and Archie singing the song “Those Were the Days.” Ms. Stapleton’s screechy half of the duet was all Edith; the actress herself had a long history of charming musical performances. She was in the original casts of “Bells Are Ringing” and “Damn Yankees” on Broadway in the 1950s, and “Funny Girl,” with Barbra Streisand, in the 1960s, in which she sang “If a Girl Isn’t Pretty” and “Find Yourself a Man.” Off Broadway in 1991, she played Julia Child, singing the recipe for chocolate cake in the mini-musical “Bon Appétit.” On television, she sang with the Muppets.
“All in the Family” was Ms. Stapleton’s first television series, but before that she appeared as a guest on several shows, including “Dr. Kildare,” with Richard Chamberlain, “My Three Sons,” “Car 54, Where Are You?” and the courtroom drama “The Defenders,” starring E.G. Marshall, in which she played the owner of a boarding house who accused one of her tenants — played by Mr. O’Connor — of murder.
Ms. Stapleton bowed out of “All in the Family” as a series regular in 1979, but she appeared in several episodes the next year, after the title of the show had been changed to “Archie Bunker’s Place.” The opening episode of the second season of “Archie Bunker’s Place” dealt with the aftermath of Edith’s death.
After “All in the Family,” Ms. Stapleton purposely sought out roles that would separate her from Edith, and in so doing she led a busy and varied, if less celebrated, performing life. She turned down a chance to star as Jessica Fletcher, the middle-aged mystery writer at the center of “Murder, She Wrote,” that became a long-running hit with Angela Lansbury. But she did appear as a guest on numerous television series, including “Caroline in the City” and “Murphy Brown,” starred with Whoopi Goldberg in a short-lived series, “Bagdad Café,” did character turns in Hollywood films (“You’ve Got Mail,” “Michael”) and made several television movies, including “Eleanor: First Lady of the World” (1982) in which she starred as Eleanor Roosevelt, a film that led to a one-woman show that toured the country.
Perhaps the most significant work of her later life, however, was Off Broadway, where she performed to sterling reviews in challenging works by Horton Foote (“The Carpetbagger’s Children”), John Osborne (“The Entertainer”) and Harold Pinter (“Mountain Language,” “The Birthday Party”).
“She brings supreme comic obtuseness to Meg, the pathetic proprietor of a shabby seaside boarding house,” Frank Rich of The New York Times wrote of Ms. Stapleton’s performance in “The Birthday Party.” Contrasting her role with that of her “broadly drawn Edith Bunker,” Mr. Rich concluded, “Ms. Stapleton’s Meg is the kind of spiritually bankrupt modern survivor who makes one question the value of survival.”

Playing the “straight man” in a comedy, even one that was as much social commentary as it was a comedy like “All In The Family,” is never an easy job, but Stapleton took the role of Edith Bunker and made it her own. Indeed, one wonders how the show itself would have worked without Stapleton’s Edith there to humanize Archie and, more than once, get the best of him notwithstanding all the barbs and insults directed her way. Her and O’Connor worked so well together it was almost like they really were married.

It’s been said more than once that a show like “All In The Family” would never make it on television today, and that’s likely true.  It’s not just because of the frank way that the show dealt with topics that weren’t just controversial, but also taboo back in the 1970s, but also because it’s hard to believe that any other group of actors could have pulled off a show like that with any degree of credibility.

Update #2 Joe Gandelman has extensive coverage of Stapleton’s career before, during and after All In The Family, including her portrayal of Eleanor Roosevelt, a role that had slipped my mind.