Science fiction writers have envisioned men flying around in their own personal jetpacks for decades. It may finally be a reality. 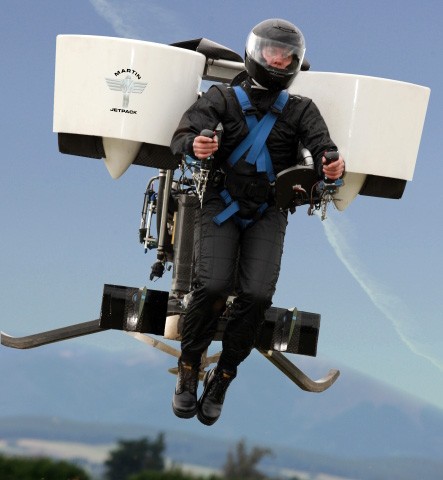 Science fiction writers have envisioned men flying around in their own personal jetpacks for decades. It may finally be a reality.

A New Zealand-invented jetpack has reached 5000 feet, or 1.5km, above sea level, a major leap towards commercial production, its developers say.

Up until now Glenn Martin’s experimental personal flying machine has only ever ground-hopped, but with a crash test dummy in the pilot’s position and flown by remote control it flew to 5000ft, then down to about 2000ft before parachuting to safety on the Canterbury Plains a few days ago, TV One’s Sunday programme reported.

Mr Martin has spent the past 30 years and $12 million in savings and venture capital on the project, and hopes the successful test will bring more investment and ultimately mass production.

The 115kg Martin Jetpack relies on two powerful “superfans”. It has the ability to fly for half an hour or more, climb more than 1000ft per minute and to cruise at 100kmh.

“This successful test brings the future another step closer,” he said. “We limited the jetpack to 800ft/min climb so the chase helicopters could keep up,” Mr Martin said.

He said it was a major step towards commercial production of the world’s first practical Jetpack and the Martin Aircraft Company aims to have first deliveries of both the manned and unmanned versions to key customers within the next 18 months.

Martin Aircraft had received substantial interest from governments, military and emergency services around the world, along with many in the general aviation sector who are interested in being one of the first to own a jetpack, Mr Lauder said.

Presuming this works out, I suspect it’ll be quite some time before these things are cheap enough for normal people to afford. (They were estimated to be $86,000 a year ago.) And regulations will likely make it quite difficult to obtain; we naturally don’t want any idiot able to fly at 5000 feet.