The Big Ten has decided that naming its championship trophy after a man who enabled the raping of multiple children is a bad idea. 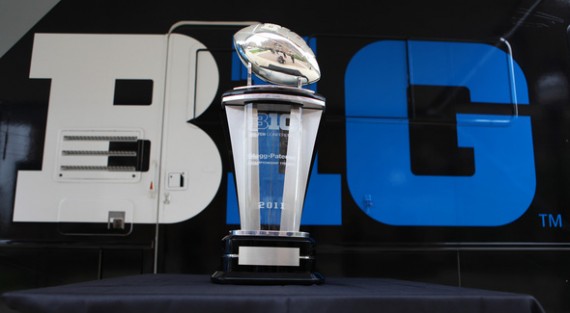 The Big Ten has decided that naming its championship trophy after a man who enabled the raping of multiple children is a bad idea.

In light of the child sex-abuse scandal at Penn State, Joe Paterno’s name has been removed from the new Big Ten championship trophy, the conference announced Monday.

The Big Ten said that the crisis at Penn State, which led to Paterno’s firing as coach Wednesday night, prompted the decision to remove his name from the trophy. The new trophy, to be awarded Dec. 3 at the inaugural Big Ten football championship game at Indianapolis, had been named for both Paterno and former University of Chicago coach Amos Alonzo Stagg.

It will now be known only as the Stagg Championship Trophy.

“We believe that it would be inappropriate to keep Joe Paterno’s name on the trophy at this time,” Big Ten commissioner Jim Delany said in a statment. “The trophy and its namesake are intended to be celebratory and aspirational, not controversial. We believe that it’s important to keep the focus on the players and the teams that will be competing in the inaugural championship game.”

To be safe, perhaps “Amos Alonzo Stagg Trophy” would be better than “Stagg Trophy” given the somewhat dated association between “stag” and pornography.

As Charles Pierce notes in a piece titled “The Brutal Truth About Penn State,” this story is far from over.

If that blights Joe Paterno’s declining years, that’s too bad. If that takes a chunk out of the endowment, hold a damn bake sale. If that means that Penn State spends some time being known as the university where a child got raped, that’s what happens when you’re a university where a child got raped. Any sympathy for this institution went down the drain in the shower room in the Lasch Building. There’s nothing that can happen to the university, or to the people sunk up to their eyeballs in this incredible moral quagmire, that’s worse than what happened to the children who got raped at Penn State.

Paterno had the power to put an end to the raping of children at least nine years ago and didn’t because it might somehow dampen his reputation. That his reputation is taking a hit is not too high a price to pay for that. Not by a long shot.