His lawyer, James Brosnahan, said that Lindh was fighting alongside the Taliban in a civil war against the Northern Alliance, that he is not a terrorist and that he never fought against U.S. troops. Brosnahan said the sentence should be reduced because Yaser Esam Hamdi, another American citizen captured in Afghanistan on suspicion of aiding the Taliban, is being released after being held for three years as an enemy combatant. Hamdi will not be charged with any crime under an agreement with federal officials made public Monday. Hamdi will be required to give up his U.S. citizenship and will be sent to Saudi Arabia, where he grew up. “Comparable conduct should be treated in comparable ways in terms of sentencing,” Brosnahan said at a news conference.

The White House referred calls to the Justice Department. Justice Department spokesman Mark Corallo, while not commenting directly on the merits of Lindh’s request, pointed out that Lindh “pleaded guilty to supporting the Taliban with his lawyers standing beside him.” “The Taliban was a brutal regime that harbored and assisted al-Qaida,” Corallo said. “It should be pointed out we are currently engaged in a global war on terrorism against al-Qaida and remnants of the Taliban.”

The fact that the DoJ made the determination that Hamdi would not be charged is hardly a rationale for overturning Lindh’s confession and plea bargain. People accused of comparable crimes receive wildly different sentences all the time. I’m going to go out on a limb here and predict that President Bush will, in fact, not be commuting Lindh’s sentence. 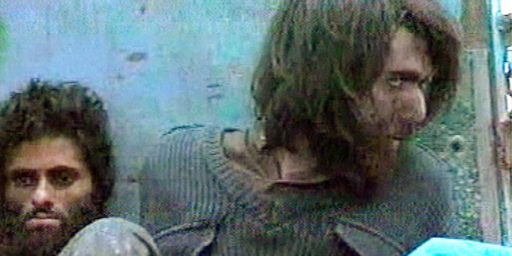