The former Governor and Presidential candidate, and current Ambassador to Russia, reveals his diagnosis of Stage One Melanoma. 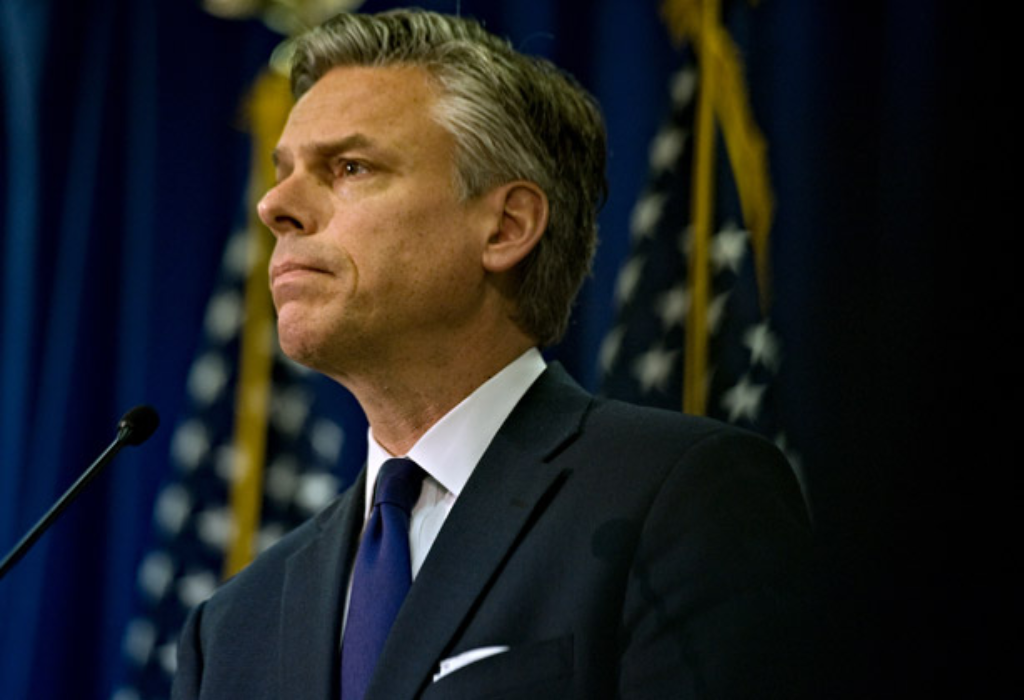 Former Utah Governor and candidate for President Jon Huntsman, who is currently serving as U.S. Ambassador to Russia, reveals in an interview that he has cancer, but it appears to have been caught at an early stage:

U.S. Ambassador to Russia Jon Huntsman Jr. said he has cancer in an interview with The Deseret News published Thursday.

Huntsman told the Salt Lake City newspaper that he had stage 1 cancer during an interview in September. Huntsman said that he would get treatment and that “we’ll be fine.” Still, he said, “It kind of puts things in perspective.”

Here’s how Huntsman describes the diagnosis in the interview:

Trailed by his spokesperson and Mary Kaye, Huntsman followed me inside and shut the door. He looked concerned and I noticed a small bead of sweat on his forehead. He began by asking me not to print something he had told me. Ambassadors can’t make political statements, he said. And then he told me he had cancer.

He had noticed a small black spot behind his ear, he explained, another on his thigh, and that summer on a trip home to Utah he’d stopped in at the Huntsman Cancer Institute and had his doctor check it out.

When he got back to Russia, he got the news. He told me he was flying back to Utah the next week to get it treated. I stood there shocked.

“It kind of puts things in perspective,” he said.

It had been quite the year, he continued. In February, he had lost his father to cancer. On the day he got the notice, he also got a phone call saying a childhood friend had died. That was also the day he got calls from reporters saying they had on-the-record confirmation he’d written the op-ed and delivered it when he was in the country for McCain’s funeral, which he continues to deny. “You sort of learn what to focus on and what to ignore,” he said.

About a week later, I typed in the code to the gate that leads to the Huntsman home in Salt Lake City and drove up a winding road until I arrived at their house. The home sits in Federal Heights, directly above the University of Utah, and offers a view of the entire valley.

Huntsman and Mary Kaye had flown in unannounced. They didn’t want anyone in Moscow to know he had cancer, worried about what they might do with the information. Already, he was subjected to a steady stream of propaganda about his activities in Russia created by state media. He had no idea what they’d do with a cancer diagnosis, but didn’t want to find out. (He asked me not reveal his diagnosis until the publication of this article).

Mary Kaye was seated on a couch in a large room off the kitchen. Large windows looked out on the valley. There was a large piece of calligraphy of a Chinese aphorism on one wall, a stuffed giraffe near the television and other toys for their grandchildren.

Mary Kaye had just turned on “The View.” Their daughter Abby had recently become a host and this was Mary Kaye’s first chance to watch the show live. She told me Jon was outside hiking, which she didn’t think was such a good idea. He’d been in surgery to remove the cancerous moles for several hours just days before and was still bruised up.

I saw him approaching, hiking up a hill below the house. He was dressed in a white T-shirt with HUNTSMAN stenciled across the front, black shorts and hiking boots. He showed me the jagged six-inch scar behind his ear, and where the surgeon had cut into his leg to remove the other mole, which had left a purple bruise.

We talked about the procedure, and how the doctors had told him because they’d caught signs of melanoma quickly, and now removed the moles, he’d probably be fine. Every month or so for the first year he will have to get checkups to make sure the cancer hasn’t spread. It was the same cancer, he noted, that had killed Sen. McCain, once it metastasized to his brain.

Which led us back to if he’d ever thought about resigning. As he pointed out, it had been a tough year. He’d lost his father to cancer, he’d lost McCain, his political idol to cancer, and now he’d been diagnosed himself. Sitting in his large, comfy house above the valley, the large screen TV on, wouldn’t it make sense to just stay here, watching his daughter host “The View,” playing with his grandkids on the floor and riding motorcycles down to Utah’s national parks? He was worth millions, after all, and he could do whatever he wanted. Winter was coming in Moscow, long days with no sunshine.

He rubbed the long jagged scar behind his ear. They’d caught the cancer in time. He’d be fine. He brought up the career diplomats he worked with at the embassy back in Russia. They served regardless of the administration. Mary Kaye had told me while we were in Moscow how she had become close with staffers in the embassy, some lifelong members of the Foreign Service, and had no idea if they were Republicans or Democrats. If Huntsman had quit after the Helsinki summit, it would be the equivalent of a four-star general walking off a battlefield because he was embarrassed by the president’s tweets. And after all the expulsions and the shuttering of the St. Petersburg consulate, that would have cratered morale.

The question of whether he would resign troubled him. He worried about what it said about the current state of America. “Sometimes you’re going to win, sometimes you’re going to lose, but let’s try to work with the people who win and make it the very best you can,” he said of the 2016 election. “We’ve entered the worst phase right now which is we’re now going to try to spend four years ripping down the person who has won, as opposed to saying, ‘What can we do to contribute to their success in areas that will make the country better and stronger?'”

Melanoma can be a serious and insidious form of cancer. As Senator McCain learned, even when it appears on the surface to have been eradicated there’s a chance that it can lay dormant, metastasize, and spread to other parts of the body. In McCain’s case, the gap between his initial diagnosis in 2008 and the discovery that cancer had spread to his brain was nine years, but it was just a year after he was diagnosed with glioblastoma in 2017 that he died. In Huntsman’s case, it appears that the cancer was discovered very early and, being Stage One, was nowhere near the point where it was in danger of metastisizing. Huntsman is much younger than McCain was when he was diagnosed, so hopefully, that and the early diagnosis will be in his favor and that the Ambassador has many years ahead of him.