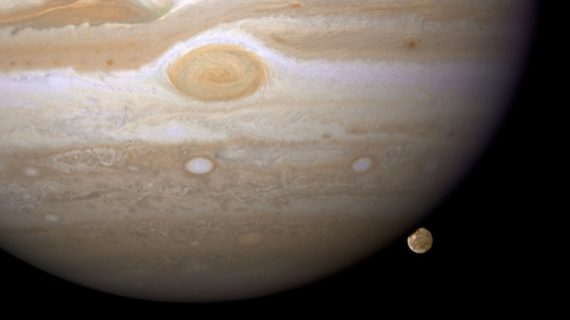 One of the most identifiable areas of the Solar System’s largest planet may be here to stay:

Jupiter’s signature Great Red Spot is sort of the Doctor Who of storms: It just won’t die — even when it has been proven that it must die. And now, for the first time, some fluid dynamicists have finally hit on some of the secrets to the giant storm’s longevity.

“It’s the largest, most enduring storm in the solar system,” said Philip Marcus of University of California, Berkeley, in a presentation at the meeting of the American Physical Society’s fluid dynamics division in Pittsburgh on Monday.

The Red Spot is about 24,000 km across, east to west, 12,000 km from north to south, and a mere 40 km deep. Its winds are roaring around at about 225 miles per hour and this incredible monster has been observed from Earth almost continuously for at least 150 years, he said. But based on all the modeling that’s been done to try to explain the Red Spot, it just isn’t possible.

“It should have disappeared in about four years according to the models,” Marcus said. “So there’s a problem. How do you go from four years to 150 years?”

One of the possibilities that was explored is that the Red Spot gets its energy from eating up smaller vortices, which it has been observed to do on occasion. But the math on that doesn’t add up to enough to support the giant storm, Marcus said.

So what he and his colleague Pedram Hassanzadeh of Harvard University did was build a better model. Previous models ignored the third, vertical dimension of the storm because it is so tiny compared to the width and breadth (plus, it was easier to model that way). As a result, the earlier works had all treated the Red Spot as a flat, two-dimensional phenomenon.

“What we found is that the spot can last 800 years,” said Hassanzadeh. The 150 years on record for the Red Spot is just a minimum, he explained.

The more interesting questions, of course, lie further down in Jupiter’s atmosphere. What, exactly, is it composed of? Does the planet even have a surface as we understand it? One recent theory posits that, because of the massive pressure created by the atmosphere, diamonds fall like rain on the planet, and possibly on Saturn as well, or even that a massive diamond-like object lies at the core of the planet itself, a theory posited by the great Science Fiction author Arthur C. Clarke in one of the sequels to 2001: A Space Odyssey. Some day, perhaps, we’ll find out the answers to these questions.