Justice Thomas To Hit Five-Year Anniversary Of Silence On Bench

Later this week, Clarence Thomas will have gone five years without asking a question during oral argument at the Supreme Court. Is that really a big deal? 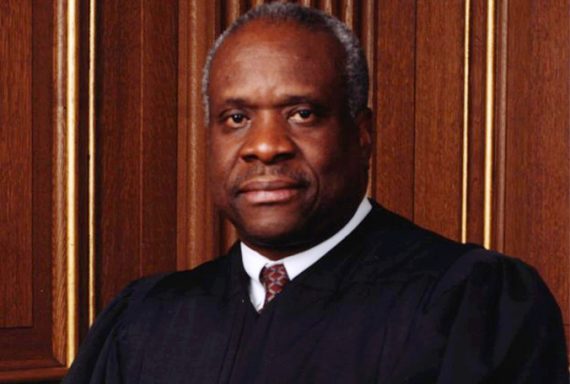 The New York Times notes today that. later this week, Justice Clarence Thomas, will mark five years since he has spoken during oral argument in the Supreme Court:

WASHINGTON — The anniversary will probably be observed in silence.

A week from Tuesday, when the Supreme Court returns from its midwinter break and hears arguments in two criminal cases, it will have been five years since Justice Clarence Thomas has spoken during a court argument.

If he is true to form, Justice Thomas will spend the arguments as he always does: leaning back in his chair, staring at the ceiling, rubbing his eyes, whispering to Justice Stephen G. Breyer, consulting papers and looking a little irritated and a little bored. He will ask no questions.

In the past 40 years, no other justice has gone an entire term, much less five, without speaking at least once during arguments, according to Timothy R. Johnson, a professor of political science at the University of Minnesota. Justice Thomas’s epic silence on the bench is just one part of his enigmatic and contradictory persona. He is guarded in public but gregarious in private. He avoids elite universities but speaks frequently to students at regional and religious schools. In those settings, he rarely dwells on legal topics but is happy to discuss a favorite movie, like “Saving Private Ryan.”

To a non-attorney, it sounds odd, or even that Thomas isn’t really doing his job, but he’s given several reasons for the way he approaches oral argument on the Court:

He has said, for instance, that he is self-conscious about the way he speaks. In his memoir, “My Grandfather’s Son,” he wrote that he had been teased about the dialect he grew up speaking in rural Georgia. He never asked questions in college or law school, he wrote, and he was intimidated by some fellow students.

Elsewhere, he has said that he is silent out of simple courtesy.

“If I invite you to argue your case, I should at least listen to you,” he told a bar association in Richmond, Va., in 2000.

Justice Thomas has also complained about the difficulty of getting a word in edgewise. The current court is a sort of verbal firing squad, with the justices peppering lawyers with questions almost as soon as they begin their presentations.

In the 20 years that ended in 2008, the justices asked an average of 133 questions per hourlong argument, up from about 100 in the 15 years before that.

“The post-Scalia court, from 1986 onward, has become a much more talkative bench,” Professor Johnson said. Justice Antonin Scalia alone accounted for almost a fifth of the questions in the last 20 years.

Justice Thomas has said he finds the atmosphere in the courtroom distressing. “We look like ‘Family Feud,’ ” he told the bar group.

At other times, Thomas has also said that by the time oral argument comes around the case has already been briefed and argued by both sides and, if it’s a high profile or important cases, there have probably been several amicus curiae briefs filed by outside parties wishing to bring a specific point in the case to the court’s attention. As Thomas said during a talk to law students two years ago, by the time oral argument comes around, the Justices have virtually all made up their minds on the issues in the case:

TUSCALOOSA, Ala. — Clarence Thomas, the justice long known as the silent member of the Supreme Court, criticized his colleagues Friday for badgering attorneys rather than letting them speak during oral arguments.

Thomas – who hasn’t asked a lawyer a question during arguments in nearly four years – said he and the other eight justices virtually always know where they stand on a case by reading legal briefs before oral arguments.

“So why do you beat up on people if you already know? I don’t know, because I don’t beat up on ’em. I refuse to participate. I don’t like it, so I don’t do it,” Thomas said during an appearance before law students at the University of Alabama.

Thomas scoffed at the idea that the justices try to use questions to influence the opinions of fellow members of the court.

All nine of us are in the same building,” he said. “If we want to sway each other we know where we are. We don’t need oral arguments to do that. It doesn’t make any sense to me.”

Thomas has also made the argument that the current court practice of frequently interrupting attorneys with questions is different from the way the Court has operated historically, and there seems to be at least some support for his point.

As an attorney, I can see two sides to this. A judge who constantly interrupts you to ask questions can be frustrating because it throws you off the points you wanted to make, and may even prevent you from making all of the point you wanted to raise during the limited amount of time you have for oral argument. At the same time. a judge who asks no questions at all can be downright terrifying because it just gives the impression that they’ve already read your brief, made up their mind, and that there isn’t anything you can say to change their opinion. I honestly can’t say that one or the other is a better style of judging, and I’m not going to join those who say that Thomas’s silence is some kind of a flaw on his part. It’s just different.