Katherine Applegate Wins Newbery Medal for ‘The One and Only Ivan’

Katherine Applegate, long suffering spouse of frequent OTB commenter Michael Reynolds, has been awarded the Newbery Medal for the most distinguished contribution to American literature for children for The One and Only Ivan. 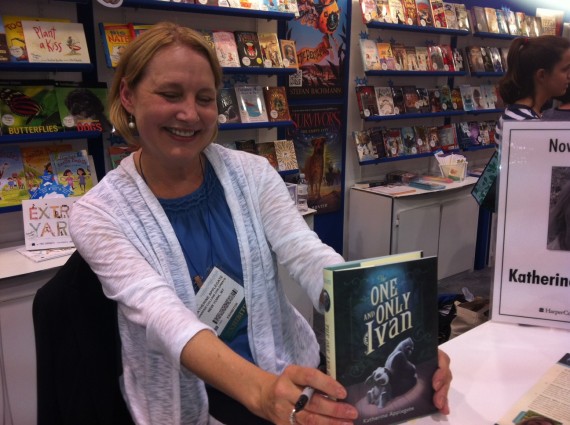 The Association for Library Service to Children has awarded the 2013 Newbery Medal for the most distinguished contribution to American literature for children  to Katherine Applegate’s The One and Only Ivan.

The 2013 Newbery Medal winner is The One and Only Ivan by Katherine Applegate, published by HarperCollins Children’s Books, a division of HarperCollins Publishers

Ivan’s transformative emergence from the “Ape at Exit 8” to “The One and Only Ivan, Mighty Silverback,” comes to life through the gorilla’s own distinct narrative voice, which is filled with wry humor, deep emotion and thought-provoking insights into the nature of friendship, hope and humanity.

“Katherine Applegate gives readers a unique and unforgettable gorilla’s-eye-view of the world that challenges the way we look at animals and at ourselves,” said Newbery Medal Committee Chair Steven Engelfried.

Applegate accomplished this singular achievement despite the burdens of being married to frequent OTB commenter Michael Reynolds.