Kerry Is Seared All Over

Nick Queen finds that Kerry’s Christmas in Cambodia isn’t the only thing that is “seared” (SEARED!!) into John Kerry’s memory.

Doug Miller notes yet another dubious searing in the comments section of the post: His false memory of being in Vietnam when Dr. Martin Luther King, Jr. was murdered.

I remember well April, 1968 – I was serving in VietnamÃ¢€”a place of violence — when the news reports brought home to me and my crewmates the violence back home – and the tragic news that one of the bullets flying that terrible spring took the life of that unabashedly maladjusted citizen.

Oddly, this does not comport with the timeline on John Kerry’s campaign website: 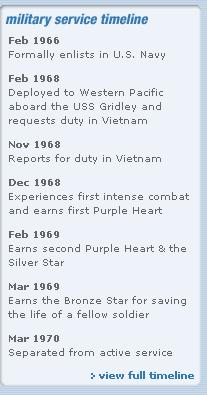 Is this that big a deal? In isolation, certainly not. But this was a speech on MLK day in 2003. It does seem to trend with an increasingly large number of occurences where Kerry has made mistatements about his service in Vietnam that would be pleasing to the audience of the moment. I’ve noted before that Kerry reminded me of Al Gore in this regard–uttering relatively meaningless mistruths for no apparent reason or advantage. We’re starting to get into Bill Clinton territory here. (“I have vivid and painful memories of black churches being burned in my own state when I was a child.” )

Obviously, this isn’t enough to change the minds of committed Democrats. Indeed, were this George W. Bush getting caught in these repeated lies I would be unhappy but almost certainly not enough to vote for Kerry. Ideology trumps character when it’s at this level of misdeed. One hopes that enough of this sort of thing might convince the swing voters to think hard about voting for him, though.

UPDATE (0830, 8/21): A commenter wonders if service on the Gridley doesn’t count as being in Vietnam. Sure enough, Kerry seems to claim this to be the case in the text of the site if not the timeline:

After completing Naval Officer Candidates School, he began his first tour of duty on the USS Gridley, a guided-missile frigate in the waters adjacent to Vietnam.

It hadn’t occured to me to check, since by Kerry’s own account (the timeline) he didn’t report to Vietnam until November 1968. I checked out the Gridley’s history. The relevant portion:

GRIDLEY operated along the California coast until sailing for the Orient 18 November [1965]. She left Subic Bay 2 January 1967 for plane guard duty in the China Sea and the Gulf of Tonkin. After varied duties in the fighting zone, she sailed for Australia en route to the West Coast and arrived Long Beach 8 June to prepare for future action.

So, indeed, the ship was probably near Vietnam on the day King was shot (April 8, 1968). This isn’t quite the same as being “in Vietnam” and the likelihood that one would see such a parallel on the day King was shot is unlikely. Of course, I’m not the kind of guy that carried a typewriter with me in lieu of clean underwear, so perhaps Kerry had a keener artistic vision.

It’s also rather odd that Kerry doesn’t dispute the description of his Vietnam service as having lasted only four months; if one added his time on the Gridley, it becomes a full year. I’m honestly not clear on what “counts” in this regard for naval personnel.