Jeff Quinton has the video, audio feed, and a transcript of John Kerry’s infamous testimony before the Senate Foreign Relations Committee on April 22, 1971.

The opener is interesting:

I would like to say for the record, and also for the men behind me who are also wearing the uniforms and their medals, that my sitting here is really symbolic. I am not here as John Kerry. I am here as one member of the group of veterans in this country, and were it possible for all of them to sit at this table they would be here and have the same kind of testimony.

His next substantive statement is more familiar:

I would like to talk, representing all those veterans, and say that several months ago in Detroit, we had an investigation at which over 150 honorably discharged and many very highly decorated veterans testified to war crimes committed in Southeast Asia, not isolated incidents but crimes committed on a day-to-day basis with the full awareness of officers at all levels of command.

It is impossible to describe to you exactly what did happen in Detroit, the emotions in the room, the feelings of the men who were reliving their experiences in Vietnam, but they did. They relived the absolute horror of what this country, in a sense, made them do.

They told the stories at times they had personally raped, cut off ears, cut off heads, tape wires from portable telephones to human genitals and turned up the power, cut off limbs, blown up bodies, randomly shot at civilians, razed villages in fashion reminiscent of Genghis Khan, shot cattle and dogs for fun, poisoned food stocks, and generally ravaged the country side of South Vietnam in addition to the normal ravage of war, and the normal and very particular ravaging which is done by the applied bombing power of this country.

Most of that third paragraph was excerpted in the second ad by the Swift Boat Veterans for Truth. It is pretty clear from the transcript that he’s repeating the charges made at Winter Soldier rather than providing eyewitness testimony. 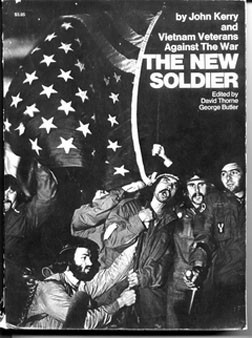 Little Miss Attila reports that the owner of the copyright to the cover of Kerry’s infamous book The New Soldier is threatening to sue people who post its image. I’m guessing it’s fair use.

Bill Quick, along with some others, has the whole book online in PDF format. That’s almost certainly not fair use! [Update: Bill notes that he’s merely linking to someone else who has it on their server. ]

Amusingly, I suggested to my then-boss at Brassey’s several months ago that we should try to acquire the rights to the book and do a quickie reprint. He didn’t think there would be much interest. (He’s actually probably right in terms of enough people willing to pay money for a copy to justify it.)

Meanwhile, Dean Esmay reports that the third Swiftie ad is out. Listen to it and see if you spot the homage to Dr. Seuss.