James thought that might help his immigration situation, but when Reid pleaded guilty to eight charges- including attempted murder – in October, the U.S. attorney’s office in Boston lost interest in James and his expiring visitor’s visa.

“He was not in position to work or to remain here,” said immigration attorney Michael Wildes, a city councilman in Engelwood, N.J., who called James’ plight to the attention of New York Sen. Hillary Rodham Clinton and Rep. Joe Crowley. Together, they found solutions.

“First, we applied for a P1visa that allowed him to work for the USBL team,” Wildes said. “That can be renewed annually. It’s a stopgap.”

Wildes promises to seek a long-term remedy for James.

“For our government not to want to help in the first place shows me we have a way to go,” he said. “We ought to be sending a strong message that we will take under our wing victims and heroes and do what is right for them.”

One would think he would go to the head of the line, no? 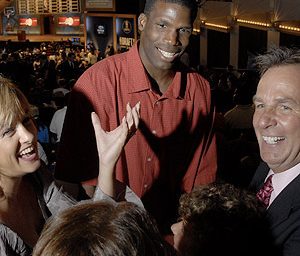