The makers of the film “Bruno” have cut a scene featuring Michael Jackson’s sister La Toya because of fears it was in poor taste following the singer’s death, a spokeswoman said Wednesday. The scene in the spoof movie featuring British comedian Sacha Baron Cohen as an outrageous gay Austrian fashion reporter was removed “out of respect” for the Jackson family, the spokeswoman said.

Baron Cohen’s last film, “Borat” enraged many people in Kazakhstan for its portrayal of a hapless Kazazh journalist who described his compatriots as primitive and incestuous.

In the offending scene in “Bruno”, he jokes about Michael while he and La Toya eat sushi off the naked bodies of workmen at his apartment and he then tries to steal Michael’s number from her phone.

The scene was removed in time for the US premiere of the film last month, in the immediate aftermath of Jackson’s death, but it was unclear at that point whether it was a temporary measure.

The notion that there are things that might be considered “in poor taste” by the standards of a Sacha Baron Cohen flick is mindboggling, indeed.  Especially when one considers the fact that the scene as described above was considered in good taste previously.

UPDATE: McSuderman actually went to see the movie last night and Megan McArdle was not amused.  Her review is worth reading in full but this point is especially worth considering:

Plus there’s always the disturbing knowledge that I’d be deeply, deeply offended if any straight man approached me the way he went after those men.

Quite right.  Taken umbrage at being unexpectedly groped or otherwise abased does not a bad person make.

Commenter Tim Maguire observes that Cohen’s “entire repertoire consists of using people’s better nature against them. Asking for the help of strangers and then, when help is given, make them look stupid and laugh at their humiliation.”   It’s occasionally quite funny because of the sheer farce.  Mostly, though, it’s rather sad. 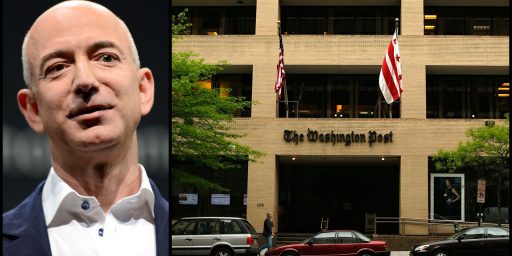