Sergeant First Class Leroy Petry, recipient of the Medal of Honor for gallantry in Afghanistan, is medically retiring from the Army. 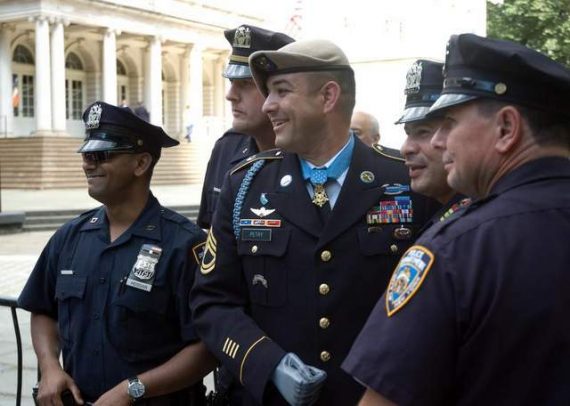 Sergeant First Class Leroy Petry, recipient of the Medal of Honor for gallantry in Afghanistan, is medically retiring from the Army.

In the almost three years since he was awarded the Medal of Honor, Sgt. 1st Class Leroy Petry has met three presidents, shared a photo with basketball star LeBron James and rapper Jay-Z, and hitched a ride with former Secretary of State Madeleine Albright.

But as he prepares to leave the Army, Petry said he’s still the same Ranger and man he always was.

Earning the nation’s highest award for valor “changed a lot of my activities, but I think, as a person, it hasn’t changed me at all,” Petry said.

Petry, who is still assigned to the 75th Ranger Regiment and works with wounded soldiers at Joint Base Lewis-McChord, Wash., is undergoing a medical evaluation and hopes to be medically retired this summer.

The 34-year-old, who has more than 14 years of service, initially planned to stay on active duty at least until he reached the 20-year mark. But he decided last fall it was time to get out.

“I’m having more challenges in my life, and I’m looking at starting phase two of my life, going back to college, finishing up my degree,” he said.

Petry declined to discuss in detail his medical issues, but he said the psychological challenges have “increased,” and he is having trouble with his knees and legs.

Petry lost his right hand when he threw an enemy grenade back toward the enemy, saving the lives of two fellow Rangers. He also was shot in the legs during that firefight in Afghanistan.

“My arm is just one of the injuries I had that day,” Petry said. “My legs give me more trouble.”

The gunshot wounds destroyed much of the muscle in his thighs, he said.

“That’s not one of those things you can keep training,” he said. “The muscle tissue is just completely gone. I have pain from standing for long periods of time, and my knees are starting to go out.”

Sometimes his legs buckle when he walks, and his wife, Ashley, has nicknamed it his “pimp walk,” Petry said, laughing.

Always upbeat, with a sharp sense of humor, Petry said he has no complaints.

“With the kind of injuries I had, it’s something I’m going to have with me the rest of my life,” he said.

Once he retires, Petry plans to get his degree in business management with a minor in accounting. After that, anything is possible, he said.

He may start a business or run a franchise. He’d like to participate in a USO tour. Or he may run for political office, he said.

“There are a lot of changes going on, and I want to be able to influence change as well, and [maybe] I can do it on a larger scale, going down the politician road,” he said.

If he runs for office, Petry envisions it’ll be a short-term endeavor.

“I think a lot of politicians are great during their first or second terms, and then it’s always good to get fresh ideas,” he said. “But I’ve got a few years to plan it out and say, ‘This is where I want to go in life.’ For right now, I’m definitely sticking to my goal of getting my degree.”

Like virtually all of our heroes, Petry doesn’t consider himself a hero, figuring he just did what he was supposed to. He was only the second living recipient of the Medal of Honor in the post-9/11 conflicts and he and Staff Sergeant Ty Carter are the only ones who remain on active duty. Presumably, both could stay in indefinitely as goodwill ambassadors. But, certainly, Petry has sacrificed enough for his country.

I wish him well in college and whatever post-military path awaits him.