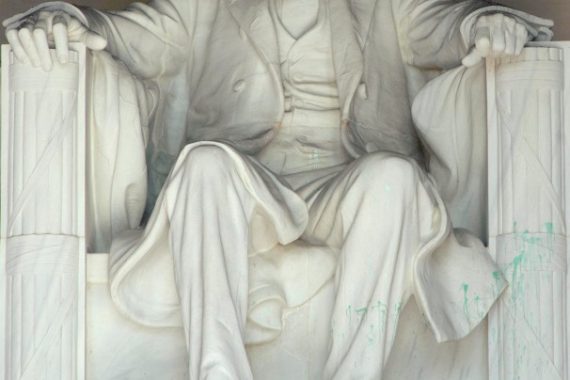 At some point during the night, the Lincoln Memorial was vandalized:

The Lincoln Memorial was shut down Friday morning after vandals splashed light green paint on the statue of the nation’s 16th president and the marble floor around it, U.S. Park Police said.

No words or symbols were painted or written on the memorial, police said. No damage was reported at the Mall’s other memorials and monuments.

Police are reviewing surveillance footage from the popular tourist attraction on the west end of the Mall, but so far no information has been released about who may have been responsible for the vandalism or what may have motivated it.

Carol Bradley Johnson, a spokeswoman for the National Mall and Memorial Parks division of the National Park Service, called the incident “heartbreaking.”

Authorities believe the paint was splattered about 1:30 a.m. onto the left leg and base of the 19-foot-high statue of Lincoln, who is depicted sitting in a throne-like chair, gazing toward the Washington Monument and, further east, the Capitol. The chair also was spattered.

Once the vandalism was discovered, U.S. Park Police used yellow police tape to close the memorial to tourists until it could be cleaned up.

A crew was removing the paint from the memorial using a pressure-washer, the National Park Service said at a news conference, and there did not appear to be any permanent damage. The park service reponed the portico steps leading up the chamber, where the statue is located, at 10:13 a.m.

Pretty pathetic. Hopefully, they’ll catch whichever idiots are responsible for this. Thankfully, at least, there doesn’t appear to be permanent damage.