This doesn’t entirely come as a surprise, but South Carolina Senator Lindsey Graham announced today that he will be voting in favor of Elena Kagan’s nomination to the Supreme Court:

Sen. Lindsey Graham (R-S.C.) announced Tuesday he would vote for the Supreme Court nomination of Solicitor General Elena Kagan, giving the nominee some bipartisan support heading into a final vote before the full Senate in the next few weeks.

“I think there’s a good reason for a conservative to vote yes,” Graham told his colleagues on the Senate Judiciary Committee. He added that she was “smart … and she’s funny, that goes a long way in my book.”

Graham’s will be the only Republican support for her during a committee vote slated to come later Tuesday, although several more GOP senators could support her confirmation when the full Senate takes up Kagan’s nomination. A conservative from South Carolina, Graham has angered some conservative activists for his support last year of Justice Sonia Sotomayor and his flirtations with Democrats on energy and immigration policy.

Graham said a key factor in his decision was the support of Miguel Estrada, the conservative lawyer whose nomination to the federal appeals court Graham trumpeted in 2002 and 2003. Estrada, however, was rejected by the Judiciary Committee in 2002, when Democrats were in the majority, and his renomination was filibustered by Democrats in 2003, a move that has left Graham embittered about the judicial nomination process ever since.

He has repeatedly talked about trying to return the nomination process to where it once was, when the burden fell on the opposition to prove someone is not qualified to sit on the bench based on their actual rulings or writings, not the perceived ideology of the nominee.

“Miquel Estrada’s letter hit me really hard,” Graham said. The former nominee, who attended law school with Kagan, praised the solicitor general and said the system would broken if someone of her qualifications could not be confirmed.

Graham’s announcement means that Kagan will have one Republican vote in the Senate Judiciary Committee, and that any effort by Republicans to filibuster the nomination is now dead, although it has been apparent for some time that this would be the case.

Graham, of course, was the nine Republicans who ended up voting in favor of Sonia Sotomayor last year, so this does not come as all that much of a surprise. 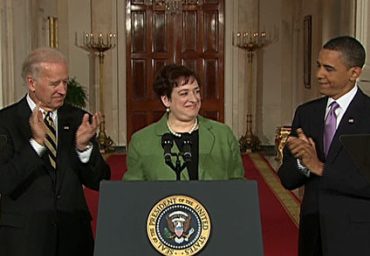