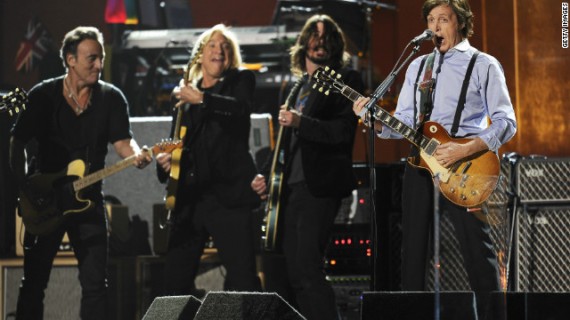 Two Rock And Roll legends were sharing the stage in Hyde Park Saturday night, then the London Police got involved:

London (CNN) – Bruce Springsteen had been waiting for this moment for a long time. “I gotta tell you,” he said to the 76,000-strong crowd, “I’ve been trying to do this for 50 years.” For the finale of his headline slot in London’s Hyde Park on Saturday, he’d arranged a very special treat: An onstage collaboration with Beatles legend Paul McCartney.

But the rock megastar hadn’t banked on the local London council deciding to show him who was boss.

At the climax of his three-hour set, Springsteen and McCartney, backed by the E Street Band and Rage Against the Machine guitarist Tom Morello, played a storming rendition of “I Saw Her Standing There” to a rapturous crowd. Springsteen’s delight was palpable: He grinned throughout, his face lit up like a child with a super-sized Christmas gift.

The supergroup then segued into a sizzling version of “Twist and Shout” — but as the night peaked against a backdrop of fireworks, a drably dressed man with sensible hair could be seen waving frantically at the back of the stage, indicating the rock legends’ time was drawing to a close.

Then, at 10:40 p.m. local time, as Springsteen and McCartney were winding up the extended “Twist and Shout,” the sound suddenly dampened, and went quiet.

At first, the Boss didn’t seem to notice. He attempted to address the crowd, apparently unaware that they couldn’t hear him. But as it became clear that there was no amplification, he and lead guitarist Stevie Van Zandt played what looked to be a brief a cappella goodnight for the benefit of the front rows, shrugged, and left the stage.

Van Zandt tweeted later, “I’m sorry but I have to be honest I’m pissed … It didn’t ruin the great night. But when I’m jamming with McCartney don’t bug me!” He also implied his fans were denied their final number, saying, “We would have been off by 11 if we’d done one more.”

London’s Westminster Council confirmed that concert organizers Hard Rock Calling had cut the power, saying they “were sticking to their license for the event.” According to the Hard Rock Calling website, Springsteen had been due to finish his set at 10:15 p.m.

But Van Zandt tweeted, “Hard Rock would have let us play all night,” adding, “Feel bad for our great fans … It’s some City Council stupid rule.”

Yes, yes, rules are rules but, come on guys, this is a once-in-a-lifetime thing. I know if I’d been there, I would’ve been as annoyed as Van Zandt was about it.

Here’s a fairly good video of part of the concert: