A loud woman who was yapping loudly for hours on an AmTrak quiet car has been arrested after getting belligerent. 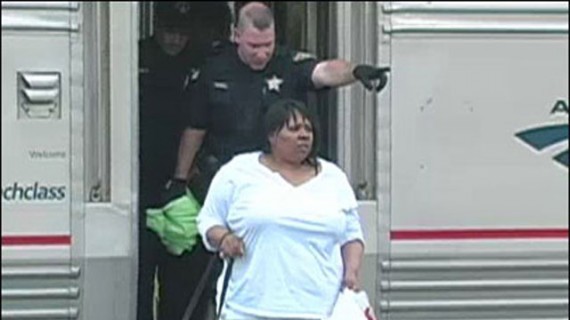 A loud woman who was yapping loudly for hours on an AmTrak quiet car has been arrested after getting belligerent. She’s also gone viral.

A woman who was escorted off an Amtrak train by police this weekend after she allegedly refused to stop talking loudly on her cell-phone has the Internet cheering her fate.

Civilians and quiet-car champions are supporting her ejection for violating policy at high volume during the 16-hour journey. It doesn’t help her cause that she became belligerent when confronted about it by one of her fellow passengers.

KOMO News reports that Lakeysha Beard says she felt “disrespected” by the incident, though passengers said it was Beard who was being rude by refusing to stop yapping while sitting in one of the train’s designated quiet cars. She had not stopped talking since the train pulled out of Oakland, California, 16 hours before it reached Salem, Oregon, when a passenger confronted her about the talking. That’s when Beard got “aggressive,” KATU reports, and conductors stopped the train so that police could remove her and charge her with disorderly conduct.

Amtrak created quiet cars in 2001 when a group of passengers who rode the Philadelphia to D.C. route every morning asked if they could reserve a car where cell-phone loudmouths weren’t welcome. Ever since, the rare havens of quiet have become a battlefield between silence-loving rule-followers and rebellious cell-phone addicts. Gawker suggested, not without a dose of sincerity, that the cops who removed Beard from the train were heroes, and that Beard should be charged with “unspeakable crimes against humanity and sentenced to life on some distant planet where there are no reception bars, ever.”

According to a very scientific reader poll at The Huffington Post, 77 percent of people were happy the woman was hauled off the train. And CNN personality Anderson Cooper blasted the woman on his “ridiculist” last night, asking “What could someone possibly talk about for 16 hours?” He even compared being stuck on the train with a person who would do such a thing to the “fifth circle of hell.”

GMA’s report is amusing–and the artistic rendering quite kind:

KVAL Has footage of the arrest:

It’s bad enough that these people are so inconsiderate of their fellow passengers to necessitate the creation of “quiet cars” to begin with. It’s simply unconscionable to then get on one of these cars and behave in this manner.