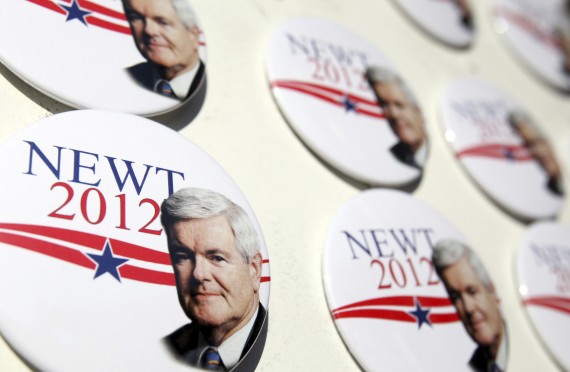 A new Gallup poll adds yet more detail to Newt Gingrich’s surge into first place in the Republican race for President, revealing that Gingrich is viewed as by far the most acceptable candidate by Republicans and Tea Party supporters:

Newt Gingrich (62%) and Mitt Romney (54%) are the only two candidates Republicans say would be acceptable presidential nominees from their party, emphasizing the degree to which the GOP race has narrowed down to these two men at this juncture. A majority of Republicans say each of the other six candidates measured would not be acceptable nominees.

Republicans and Republican-leaning independents in Gallup’s Nov. 28-Dec. 1 survey were asked to rate the acceptability of eight active GOP candidates. The “acceptable” responses range from Gingrich’s 62% to 27% for Rick Santorum.

This is the first time Gallup has asked this question in reference to the 2012 election. More than half of Republicans nationwide now see Rick Perry and Herman Cain — both of whom previously led or tied for the lead in Gallup’s measure of positive intensity and in Gallup’s trial-heat ballots — as unacceptable nominees. These data were collected prior to Cain’s Saturday announcement that he was suspending his campaign for the GOP nomination.

Here’s how all the candidates measure up:

Moderate and liberal Republicans are more likely than conservatives to say Paul and Huntsman would be acceptable nominees — but in both instances, support for the candidates is still well below the majority level.

The irony of Tea Party supporters finding Newt Gingrich acceptable in such large numbers cannot be under-stated considering that the last 13 years of his professional and political career have essentially been antithetical to the stated principles of the Tea Party movement. Not that I actually thought the Tea Party movement actually cared about its principles, that is.