The most 'America' story ever. 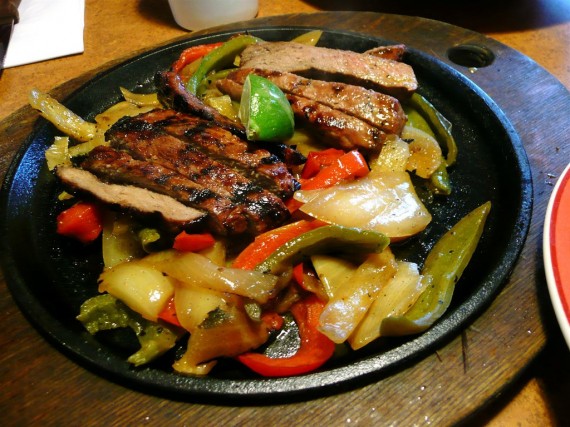 A man who leaned over a plate of sizzling fajitas to pray can’t sue a Westampton restaurant because the dish burned him, an appellate court ruled Wednesday.

Hiram Jimenez sought damages from Applebee’s Neighborhood Grill and Bar after a March 2010 incident at the chain’s restaurant on Burlington-Mount Holly Road. But an appellate panel said Applebee’s can’t be held responsible because the hot food posed an “open and obvious” danger.

According to the ruling, Jimenez ordered fajitas that were placed in front of him in a “sizzling skillet.” When he bowed his head “close to the table,” the ruling says, Jimenez heard “a loud sizzling noise, followed by ‘a pop noise’ and then felt a burning sensation in his left eye and on his face.”

His lawsuit said a waitress did not warn Jimenez that the dish was hot. It argued Jimenez suffered “serious and permanent” injuries “solely as a result of (Applebee’s) negligence when he came in contact with a dangerous and hazardous condition, specifically, ‘a plate of hot food’.”

A trial judge dismissed the suit, finding Applebee’s — a California-based chain with more than 1,900 restaurants — was not required to warn Jimenez “against a danger that is open and obvious.”

Jimenez appealed, but a two-judge panel came to the same conclusion.

It noted business owners are required to “discover and eliminate dangerous conditions, to maintain the premises in safe condition and to avoid creating conditions that would render the premises unsafe.”

But it said the risk posed by the hot platter was “self-evident.” Applebee’s, the ruling said, “had no duty to warn (Jimenez) that the food was sizzling hot and should be approached with due care.”

Of course, servers routinely issue such a warning, anyway. But the judges here are of course correct: anyone who’s ever ordered fajitas served in this manner is aware that the plate is steaming hot.

Those of a certain age will immediately be reminded of Stella Lieback, the then-79-year-old woman who sued McDonald’s two decades ago after she spilled coffee in her lap and suffered third-degree burns. She won that suit, including an initial award of $2.7 million in punitive damages, becoming for a time “the poster child of excessive lawsuits.” In reality, though, McDonald’s coffee was much hotter than customary, numerous previous people had been seriously injured as a result, and the trail judge called McDonalds’ conduct reckless, callous and willful.

Applebee’s, on the other hand, did nothing here out of the ordinary. Why fajitas, unlike almost any other food, is served on a metal plate brought right from the oven (and thus continuously cooks the meat) I don’t know. But Applebee’s actually calls them “sizzling skillet fajitas” right there on the menu.