The Kyrgyz parliament has voted to close the U. S.’s Manas air base, a primary route of supply for the NATO forces in Afghanistan:

BISHKEK (Reuters) – Kyrgyzstan’s parliament voted on Thursday to close the last remaining U.S. air base in Central Asia, dealing a blow to U.S. efforts to use the region as a jumping-off point for its growing campaign in Afghanistan.

President Barack Obama has made the campaign in Afghanistan his top foreign policy priority.

But U.S. efforts to diversify supply routes into Afghanistan after supply convoys were attacked by militants in Pakistan hit a stumbling block when Kyrgyzstan said it would close the last remaining U.S. air base in Central Asia.

Kyrgyzstan’s parliament backed a decision by President Kurmanbek Bakiyev — announced in Moscow after he secured a $2 billion package of aid and credit from Russia — to close the Manas air base 35 km (22 miles) from the capital Bishkek.

Kyrgyz Foreign Minister Kadyrbek Sarbayev said Washington would be given 180 days to wrap up operations after the parliamentary decision was signed into law.

Apparently Moscow was willing to outbid or out-threaten Washington on this matter.

Afghanistan is landlocked and is bordered only by Pakistan, Iran, Tajikistan, Uzbekistan, and Turkmenistan, the latter three all being former Soviet Republics. Manas was our only air base in Central Asia. Now that Manas is to be closed we’ll either be even more dependent on the fragile overland route through the Khyber Pass, have yet another topic of interest to discuss with Iran, or need to negotiate a new base with Uzbekistan, Tajikistan, or Turkmenistan, faint hopes at best. Sending more supplies via Azerbaijan is another alternative.

Whatever the outcome this makes re-supplying our soon-to-be-larger force in Afghanistan that much more difficult. And expensive.

Russia, which has an airbase in Kant, a short distance from the Manas base, recently said it was ready to broaden cooperation with Washington on non-military supplies to Afghanistan via the so called “northern corridor,” which is likely to cross Russia into Kazakhstan and Uzbekistan before entering northern Afghanistan.

For some reason I find this oddly resonant with Russia’s seeking to become the primary conduit for natural gas and oil into the European Union. Is this a bid to assert themselves as the indispensable nation? 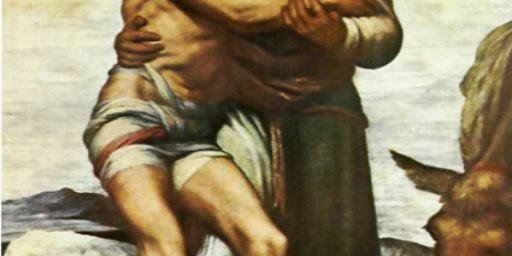