The Maryland Terrapins upset the Miami Hurricanes 32-24 last night in college football's opening weekend. But all anyone is talking about is the ugly uniforms. 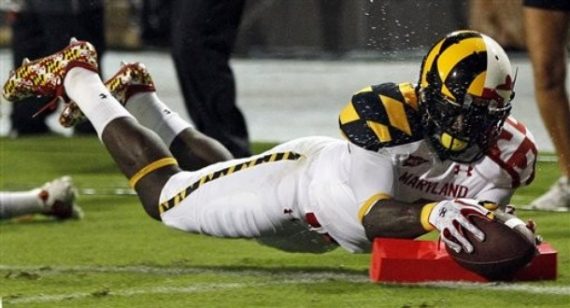 The Maryland Terrapins upset the Miami Hurricanes 32-24 last night in college football’s opening weekend. But all anyone is talking about is the ugly uniforms.

“For the uniforms alone, Maryland should be charged with lack of institutional control…” –Eric Stangel, head writer for the Late Show with David Letterman

“Anyone on Maryland have “HE HATE ME” on the back if their jersey?” — NFL free agent safety Gerald Alexander

Stengel’s quip is both the funniest and the one closest aligned with my reaction. ESPN’s Jay Bilas gets an honorable mention for,  ”The 1970’s Houston Astros have just released a statement that they would not be caught dead in the new Maryland football uniforms.” 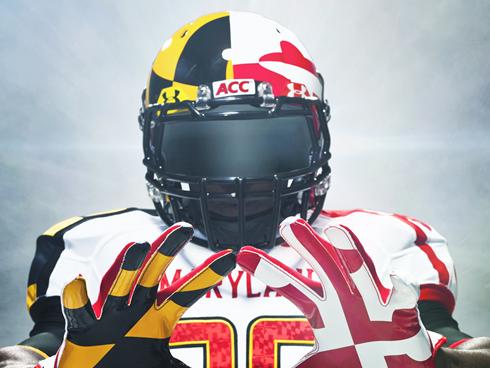 According to a press release from Under Armour, the new duds are “inspired by characteristics specific to the Maryland state flag and the University of Maryland… the jersey numbers, cleats, and gloves all feature a custom Maryland flag print.”

After the game, new coach Randy Edsall defending the Terps’ fashion statement. ”I was proud that we kept this under the lid,” he said on ESPN. “This is our pride uniform — Maryland pride. This is part of the new branding we’re doing here. We want to incorporate the state colors and let everyone know we are playing for everyone in the state.”

It’s an interesting concept and the Maryland state flag is actually very attractive. The left side of the helmet, the left shoulder decoration, and the left glove use it quite nicely. A bit garish, perhaps, but workable. But doing half-and-half? It’s just aesthetically jarring.

The Maryland flag actually juxtaposes the yellow/black and red/white schemes, too, but in a symmetrical pattern. 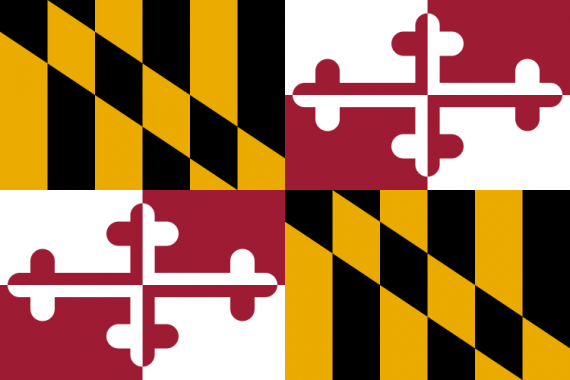 Red and white are, of course, Maryland’s traditional uniform colors. Why not do the helmet, shoulder decoration, and gloves in the checkerboard and make the rest of the uniform either white on red or red on white (depending on whether at home or on the road)?

But I’m a middle aged white guy. As the selected tweets show, young football players actually seem to dig the new look. And that’s probably more important than appealing to guys like me.

Grantland‘s Michael Kruse argued last week that the University of Oregon transformed themselves into a national football power with their Nike-funded garish uniforms.

[T]he most consistently conspicuous portion of Knight’s lavish contributions are the team’s much-discussed uniforms — the yellows and the greens, the blacks and the grays, the highlighter neons and the stormtrooper whites, the many different helmets and jerseys and pants and socks and shoes, the more than 500 possible combinations in all.

“The whole thing happens on TV now,” Knight said in 1993. “The final game of the NCAA basketball tournament is better than any runway in Paris for launching a shoe. Kids climb up next to the screen to see what the players are wearing.”

So after the Cotton Bowl loss, Knight asked the Ducks’ coach a question, and he asked Nike’s designers a question.

He asked the coach: What do you need from me?

He asked the designers: How can we make teenagers who are good at football want to come to the University of Oregon?

About a year later, on the other side of the country, the head of a think tank and a visiting scholar at Berkeley’s Center for Research on Social Change gave a wonky talk at a conference in Cambridge, Mass. “We are headed,” Michael H. Goldhaber said, ”into what I call the attention economy.”

Economics is the study of the allocation of resources that are scarce. These days, more and more, information isn’t scarce. Stuff isn’t scarce. What’s scarce is attention. The companies that win in an attention economy are those that win the eyeballs of people who have too much to look at. Too many ads. Too many screens in too many places. Too many games on too many channels on too many days of the week.

“This new economy,” Goldhaber said in Cambridge in January 1997, “is based on endless originality.

“If you have enough attention,” he added, “you can get anything you want.”

It’s a strange concept. The Alabamas, Penn States, and Notre Dames of the world are competing using essentially the same uniforms they wore in the age of black-and-white television. But the Marylands and Oregons may well need to do something a bit more unconventional to attract the attention of talented young athletes.

Photos: AP and Under Armour