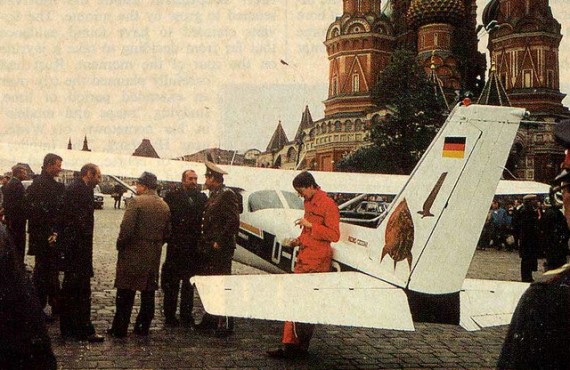 Imagine yourself back in May, 1987 for a little bit. The Cold War seems to be cooling down somewhat with the rise to power of Mikhail Gorbachev and the dialogue that was opening between him and President Ronald Reagan, but tensions were still high. Only four years earlier, a Korean Air Lines passenger jet that went off-course near the Japan-Soviet border was shot down by Soviet MiG’s, an incident that perhaps did more to help the cause of anti-Communism than anything else. Then, you wake up on the morning of May 28th to learn that some guy from the Federal Republic of Germany (West Germany as we called it then) decided to get in a propeller-driven aircraft and fly to Moscow:

Rust was an inexperienced pilot, aged 18, and with about 50 hours of flying experience at the time of his flight. On May 13, 1987, Rust left Uetersen near Hamburg and his home town Wedel in his rented Reims Cessna F172P D-ECJB, which was modified by removing some of the seats and replacing them with auxiliary fuel tanks. He spent the next two weeks traveling across Northern Europe, visiting the Faroe islands, spending a week in Iceland, and then visitingBergen on his way back. He was later quoted as saying that he had the idea of the attempt to reach Moscow even before the departure, and he saw the trip to Iceland (where he visited Hofdi House, the site of unsuccessful talks between the United States and the Soviet Union in October 1986) as a way to test his piloting skills.

Rust disappeared from the Finnish air traffic control radar near Sipoo.[1] Air traffic control presumed an emergency and a rescue effort was organized, including a Finnish Border Guard patrol boat. They found an oil patch near the place where Rust disappeared from radar and performed an underwater search with no results. Rust was later fined about US$100,000 for this effort. The origin of the oil patch remains unknown.

Rust crossed the Baltic coastline in Estonia and turned towards Moscow. At 14:29 he appeared on air defense radar and, after failure to reply to an IFF signal, was assigned combat number 8255. Three SAM divisions tracked him for some time, but failed to obtain permission to launch at him. All air defenses were brought to readiness and twointerceptors were sent to investigate. At 14:48 near the city of Gdov one of the pilots observed a white sport plane similar to a Yakovlev Yak-12 and asked for permission to engage, but was denied.[1]

The fighters lost contact with Rust soon after this. While they were directed back to him he disappeared from radar near Staraya Russa. The then-West German magazine Buntespeculated that he might have landed there for some time, citing that he changed his clothes somewhere during his flight, and that he took too much time to fly to Moscow considering his plane’s speed and weather conditions.

Air defense re-established contact with Rust’s plane several times but confusion followed all of these events. The PVO system had shortly before been divided into several districts, which simplified management but created additional overhead for tracking officers at the districts’ borders. The local air regiment near Pskov was on maneuvers and, due to inexperienced pilots’ tendency to forget correct IFF designator settings, local control officers assigned all traffic in the area friendly status, including Rust.[1]

Near Torzhok there was a similar situation, as increased air traffic was created by a rescue effort for an air crash that had happened the previous day. Rust, flying a slow propeller-driven aircraft, was confused with one of the helicopters taking part in the rescue. He was spotted several more times and given false friendly recognition twice. Rust was considered as a domestic training plane defying regulations, and was issued least priority.[1]

Around 7:00 p.m. Rust appeared above Moscow’s center. He had initially intended to land in the Kremlin, but changed his mind: he reasoned that landing inside, hidden by the Kremlin walls, would have allowed the KGB to simply arrest him and deny the incident. Therefore, he changed his landing spot to Red Square.[1] Heavy pedestrian traffic did not allow him to land there either, so after circling about the square one more time, he was able to land on a bridge by St. Basil’s Cathedral. A later inquiry found that trolly wires normally strung over the bridge – which would have incidentally prevented his landing there – had been removed for maintenance that very morning, and were replaced the day after.[1]After taxiing past the cathedral he stopped about 100 meters from the square, where he was greeted by curious passersby and was asked for autographs.[4] A British doctor had videotaped Rust’s circling over the Red Square and landing on the bridge.[4] Rust was arrested two hours later.[5]

Rust ended up spending nearly a year in a Soviet prison before being returned to West Germany. In a different era, he either would have been shot out of sky or shot in the basement of the KGB’s Lubyanka Headquarters. So in some sense, he was an incredibly lucky young man who likely benefited from the fact that his mostly reckless act occurred in an era when the Soviet Union was opening itself up to the world media, so it would have been impossible for them to just make him “disappear” in the manner that had occurred in the past.

Now, twenty-five years later, Rust, who was born just about two months before I was, seems to realize just how lucky he was:

Now 43, Rust told Russian mass-circulation newspaper Komsomolskaya Pravdahe flew to Moscow across the Iron Curtain because he wanted the Cold War to be over.

“I wanted to leave a message for humankind which I did,” he said.

“I wanted to take an active part in perestroika and was hoping Gorbachev would make me part of this movement,” Rust said, referring to the reform process launched by the last Soviet leader. “And I believe I sped up perestroika a little bit.”

“For me the most important thing was to fly down to Moscow and give the world my message. Looking back I still think I’ve won because I’ve done what no-one expected,” he said, adding he was lucky the Soviet forces did not shoot him down.

How the teenager was able to cross into the heavily guarded Soviet airspace and land the small plane without being shot down is a mystery still to this day. The flight became legendary.

“Nobody could believe back than that of all things on the ‘Day of the Border Guards’ that a young, inexperienced pilot could penetrate to the heart of the heavily armed country,” said Vladislav Belov, director of the Centre for German Research at the Russian Academy of Sciences.

May 28 was the “Day of the Border Guards”, which as the name implies, was a day celebrating the soldiers guarding the country’s borders.

A year after returning from Moscow Rust was back in trouble with the law, this time for the attempted murder of a nursing student. He was convicted and sentenced to two and a half years in jail, Stuhler and Gabriele Denecke, a documentary filmmaker, both note.

Rust told Denecke in her film, “The Kremlin Pilot”, that considering what happened to him after the flight, he would not try something like that again.