According to Maureen Dowd, Barack Obama's biggest problem is that there are too many white people in this picture. 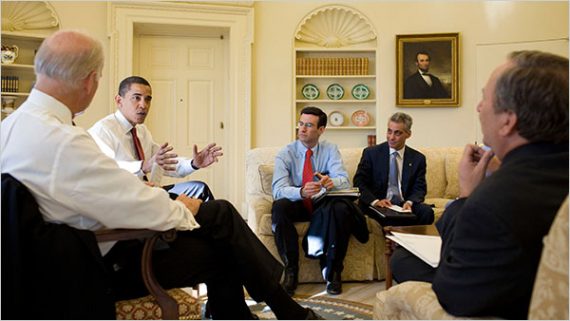 Continuing what has been a rather annoying obsession with race that seems to have gripped the nation’s political class over the past several weeks, Maureen Dowd argues in today’s New York Times that Barack Obama isn’t hiring enough black people:

The Obama White House is too white.

It has Barack Obama, raised in the Hawaiian hood and Indonesia, and Valerie Jarrett, who spent her early years in Iran.

But unlike Bill Clinton, who never needed help fathoming Southern black culture, Obama lacks advisers who are descended from the central African-American experience, ones who understand “the slave thing,” as a top black Democrat dryly puts it.

The first black president should expand beyond his campaign security blanket, the smug cordon of overprotective white guys surrounding him — a long political tradition underscored by Geraldine Ferraro in 1984 when she complained about the “smart-ass white boys” from Walter Mondale’s campaign who tried to boss her around.

Otherwise, this administration will keep tripping over race rather than inspiring on race.

The West Wing white guys who pushed to ditch Shirley Sherrod before Glenn Beck could pounce not only didn’t bother to Google, they weren’t familiar enough with civil rights history to recognize the name Sherrod. And they didn’t return the calls and e-mail of prominent blacks who tried to alert them that something was wrong.

As Allahpundit notes, Dowd goes against conventional wisdom here by asserting that it was “West Wing white guys” who pushed Shirley Sherrod out the door. To date, both the White House and the Department of Agriculture have said that the decision to fire Sherrod was made by Agriculture Secretary Tom Vilsack alone, without consulting the White House. While Sherrod herself related a conversation with a USDA official saying that “the White House” wanted her fired, there has been some speculation that this may have been a reference to the White House liason inside the Department of Agriculture. While you may not believe that the White House wasn’t involved in the firing, there’s no evidence that they were and Dowd is simply making things up when she attributes the firing to “West Wing white guys.”

But, it gets worse from there:

The president appears completely comfortable in his own skin, but it seems he feels that he and Michelle are such a huge change for the nation to absorb that he can be overly cautious about pushing for other societal changes for blacks and gays. At some level, he acts like the election was enough; he shouldn’t have to deal with race further. But he does.

His closest advisers — some of the same ones who urged him not to make the race speech after the Rev. Jeremiah Wright issue exploded — are so terrified that Fox and the Tea Party will paint Obama as doing more for blacks that they tiptoe around and do less. “Who knew that the first black president would make it even harder on black people?” asked a top black Democratic official.

It’s the same impulse that caused Obama campaign workers to refuse to let Muslim women with head scarves sit in camera range during a rally. It’s the same impulse that has left the president light-years behind W. on development help for Africa. In their rush to counteract attempts to paint Obama as a radical/Muslim/socialist, Obama staffers can behave in insensitive ways themselves.

The president shouldn’t give Sherrod her old job back. He should give her a new job: Director of Black Outreach. This White House needs one.

The first thing that comes to mind about all of this, of course, is the irony of an Upper West side white woman purporting to lecture Barack Obama about race. While Dowd was working a beat as a reporter for the Times, Barack Obama was a community organizer in Chicago where there are, well, actual racial issues. One would think he’d know a little bit more about the subject than she would. The same goes for Valerie Jarrett.

The real sin of Dowd’s column, though, is her assumption that only persons of a certain color can by racially sensitive, and that it was a lack of racial sensitivity that led to the debacle in the Sherrod matter. Even if we accept Dowd’s unsupported assertion that this is all the fault of “West Wing white guys,” though, it’s apparent that this is nothing to do with skin color and everything to do with competence. It doesn’t take an African-American to realize that you shouldn’t base a personnel decision based upon a two and a half minute web video posted on the web site of a guy with a known bias against the Obama Administration. How hard would it have been for someone at the USDA — or, if you accept Dowd’s theory, the White House — to pick up the phone and call someone like Clyburn or Lewis and get their take on this before forcing Shirley Sherrod to pull over to the side of the road and send her resignation in via Blackberry ? That’s not being racially tone-deaf, that’s called incompetence and, as I noted on Wednesday, a sign of basic political weakness inside the Administration. Creating an office of “Black Outreach” isn’t going to help those problems one bit.

FILED UNDER: Barack Obama, Politicians, Race and Politics, US Politics

What Juan Williams Has In Common With Shirley Sherrod