In "Veterans and Senate Buddies, Until Another War Split Them," Elisabeth Bumiller profiles the relationship between Chuck Hagel and John McCain: 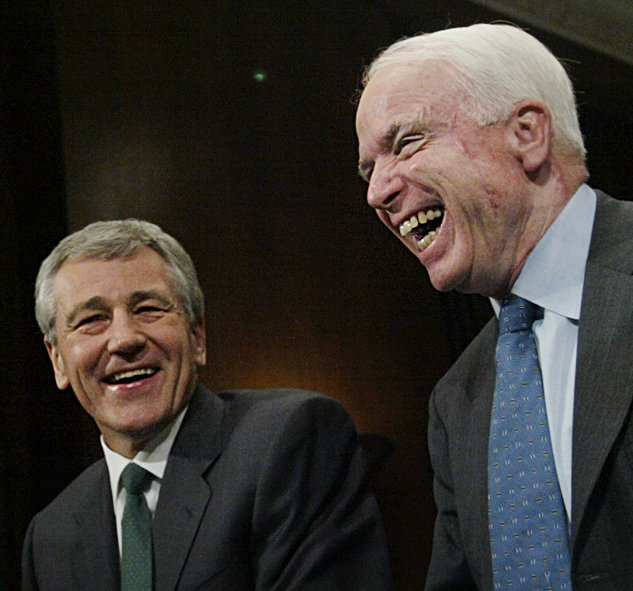 In “Veterans and Senate Buddies, Until Another War Split Them,” Elisabeth Bumiller profiles the relationship between Chuck Hagel and John McCain:

In the old days it was like a Senate buddy movie.

John McCain and Chuck Hagel traveled the world together, popped into each other’s neighboring offices on Capitol Hill and played pranks. Mr. Hagel, then a Republican senator from Nebraska, dropped by one Halloween wearing a McCain mask. Mr. McCain, an Arizona Republican, liked to jokingly fire Mr. Hagel’s staff. “Pack up your desks!” he would say. As Vietnam War veterans — Mr. McCain had been a naval officer and a pilot, Mr. Hagel an enlisted infantryman — they forged an even closer bond.

“John would call him sergeant — ‘Hey, Sergeant, come in, Sergeant!’ ” said Senator Lindsey Graham, the South Carolina Republican who is Mr. McCain’s closest friend in Washington. “They would salute each other.”

But as Mr. Hagel heads into contentious confirmation hearings to be President Obama’s secretary of defense, the two remain estranged over policy differences that started with the Iraq War, spread into bitter presidential politics and ultimately damaged, if not ended, a friendship. Some colleagues say the break between two stubborn iconoclasts has been exaggerated in the absolutist world of the capital, but no one disputes that the relationship has cooled dramatically.

“The Iraq war is where the policy differences became pretty difficult to deal with,” said Mr. Graham, speaking of Mr. McCain’s aggressive push for the 2007 surge of American forces in Iraq and Mr. Hagel’s unsuccessful fight against that escalation. “The worldview really began to diverge.”

The differences were on full display when Mr. McCain released a statement after Mr. Hagel was nominated on Monday saying he had “serious concerns” about the positions on national security Mr. Hagel had taken over the years. The two spoke the same day by phone in what an aide called a cordial conversation — one of at least 30 calls to senators Mr. Hagel has made this week in preparation for his hearing — but on Tuesday on CNN Mr. McCain had not changed his tone.

While “the friendship, I hope, is still there,” Mr. McCain said, he remained worried about Mr. Hagel’s “overall attitude about the United States, our role in the world, particularly in the Middle East, and whether we should reduce the Pentagon further.”

People who know both men say that at this point Mr. Hagel appears to have the votes for confirmation and that in the end Mr. McCain could well vote yes for the friend who was at his side during his unsuccessful 2000 campaign for the Republican presidential nomination. But aides to both acknowledge the dynamic on Capitol Hill could change and that Mr. McCain — and others — will give Mr. Hagel a rough time. At the very least, they say, Mr. McCain remains bruised over Mr. Hagel’s decision not to support Mr. McCain when he became the Republican presidential nominee in 2008, and over a trip Mr. Hagel took with Mr. Obama to Iraq the same year.

“He was very angry about it,” said one of Mr. McCain’s 2008 advisers, who asked not to be identified discussing the complicated dynamics between the two. Mr. McCain “takes policy disputes very, very personally,” the adviser added. He described Mr. McCain’s current view of Mr. Hagel as one of “profound disappointment.”