John McCain has proposed offering a $300 million dollar prize to the developer of “breakthrough battery technology.”

Senator John McCain on Monday proposed the creation of a $300 million prize for anyone who developed breakthrough car-battery technology and he recommended greater tax incentives for buyers of nonpolluting autos, saying that only a combination of increased oil production, conservation measures and ingenuity could ease the fuel crisis and slow global warming.

Perhaps McCain’s most striking proposal was the $300 million prize “for the development of a battery package that has the size, capacity, cost and power to leapfrog the commercially available plug-in hybrids or electric cars.”

That’s not a bad idea, assuming that the prize conditions are well defined. I’ve always preferred the incentive approach to research as opposed to direct subsidies. Plus, if the car battery principles can be applied to other energy storage, it might help boost the transition to fluctuating power sources such as solar and wind. 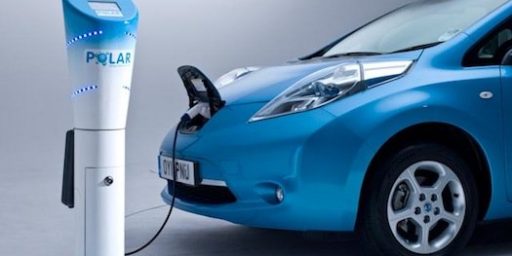