The first major national poll since the New Hampshire primaries show huge jumps for John McCain and Hillary Clinton among registered voters in their parties.

John McCain’s victory in Tuesday’s New Hampshire primary appears to be paying off.

The senator from Arizona is the front-runner in the battle for the Republican presidential nomination, according to the first national poll taken after the New Hampshire primary. McCain has the support of 34 percent of registered Republicans in a CNN/Opinion Research Corp. survey out Friday. That’s a 21-point jump from the last CNN/Opinion Research poll, taken in December, well before the Iowa caucuses and New Hampshire primary earlier this month.

Former Arkansas Gov. Mike Huckabee, who won the Iowa Republican caucuses, is in second place in the new survey, with 21 percent of those registered Republicans polled supporting him for the GOP nomination. Rudy Giuliani follows with 18 percent, a drop of six points from the December poll, when the former New York City mayor was the front-runner.

Former Massachusetts Gov. Mitt Romney is in fourth place, with the backing of 14 percent of registered Republicans, with former Sen. Fred Thompson of Tennessee at 6 percent, Rep. Ron Paul of Texas at 5 percent, and Rep. Duncan Hunter of California at 1 percent.

Early victories appear to have boosted Sen. Hillary Clinton of New York and Sen. Barack Obama of Illinois in the Democratic nomination battle, with Clinton the choice of nearly half of registered Democrats nationwide. Clinton is at 49 percent in the new poll, up nine points from the December survey, with Obama at 36 percent, which is a six-point gain from his December standing.

Compare with other national polls taken after Iowa but before New Hampshire:

Schneider’s analysis seems right to me: McCain and Clinton are the frontrunners, for whatever that’s worth. Several big caveats, though, are in order.

We don’t select nominees nationally but on a state-to-state basis.

As we see clearly demonstrated by this survey, people’s support is very tentative right now and is highly conditioned on previous success. For Republicans, what happens in Michigan Tuesday could well influence what happens in South Carolina and Nevada next Saturday. For Democrats, Michigan is irrelevant and South Carolina happens a week later, so Nevada will be the next stop. If John Edwards and Fred Thompson don’t win in South Carolina, they’re done.

Next comes Florida, on January 29. But the Democrats have stripped the state of all its delegates and the Republicans have taken half for violating rules by moving ahead of February 5 by permission. The delegates are less important, though, than momentum. This one’s make-or-break for Rudy Giuliani, who either catapults back into the race by winning a big state or is finished.

Why? Because on February 5 twenty-two states with more delegates, by far, than will be handed out the entire rest of the cycle before or after will vote on one day. If Giuliani hasn’t shown that he’s a viable candidate, his supporters will vote strategically for one of the others.

The views of actual voters, not merely registered voters, is what matters.

Predicting who will actually turn out to vote is more art than science but some pollsters are quite good at it. The media surveys typically don’t spend the money needed to properly screen, since they’re mostly for entertainment value — news debate fodder to fuel the “horse race” coverage. The parties and the candidates are trying to react likely voters, though, and there’s no point in polling if they can’t properly screen.

The liveliness of this race, with several serious candidates, has made this job harder, because turnout has been higher than usual, meaning that merely using past behavior as an indicator is insufficient.

The campaign hasn’t really started yet.

In terms of time and energy expended, the primary campaign is about 90 percent finished. Because of the ridiculous amount of time necessary to court voters in Iowa and New Hampshire, some of these people have been campaigning since November 2004; all but Thompson have been doing so in earnest for a year or so.

In terms of a push to reach voters across the country, though, we’re barely out of the gate. If you’re reading this, you’ve likely been paying close attention to the race for about as long as the candidates have been riding around on buses and kissing babies. We’re very unusual in that regard.

More importantly, there has been relatively little television and radio advertising in most states. It would have been a waste of money that most candidates didn’t have to blanket the country with ads when Iowa and New Hampshire were where the fight was taking place. McCain, certainly, couldn’t afford it. That’s changed.

The corollary, though is that the candidates who have yet to win anything are going to have a hard time financing a media blitz ahead of February 5. That’s why it’s so crucial for Thompson and Edwards — and arguably Huckabee, even though he did win Iowa — to win in South Carolina. And adds to the pressure on Giuliani to win Florida. 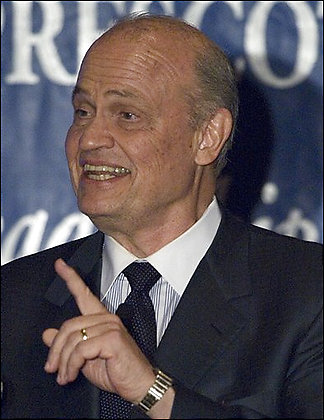