Stan McChrystal's boys had "Team America" patches made up.

Marc Ambinder gives us the rest of the story on the anecdote from the infamous Rolling Stone piece that Stanley McChrystal’s team jokingly called themselves “Team America.”

Not only is Hastings’ vignette true, but the “collection” of people who identified themselves with Team America had a special patch made for their service. (It was created for them by a small company somewhere in  Missouri.)   Here, for the first time, is an image of the patch that cemented the camaraderie of Team McChrystal. I discovered it on Twitter and verified its validity. 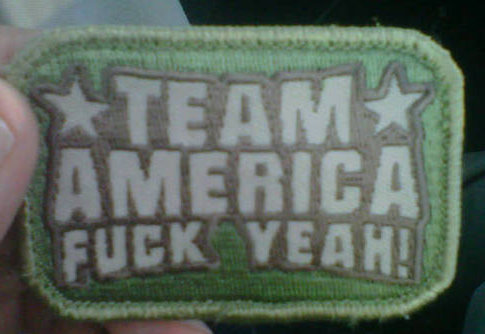 Joshua Foust, though, thinks this contradicts the spin from McChrystal’s team that that “We joke that we are sometimes perceived that way by many of the NATO forces.”

Maybe.  Or it could just be a classic case of people taking an insult and wearing as a badge of honor, such as happened with “Yankee Doodle.”